This is my first Winamp Plug-in.For best effect you\\\'ll need a graphic card capable of doing geometry instancing, and pixel shader 2.0.I hope you like it.Any suggestions or bug reports I hope you will still send to me. Best regards, BlooD2oo1 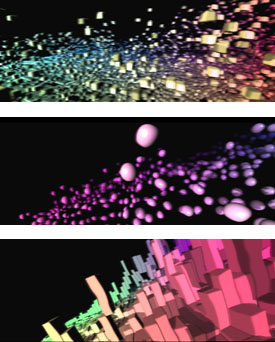 Thank you for your submission.

Not too bad - It's a pretty good Visualization, it needs to take up the whole visualization window, and possibly needs a little more added to it, but still very good. - August 18, 2009 by Zedo Mann

Great visualizer - I like this visualizer the most except for the creator tag(which isn't even his real name but instead his screenname) and the visualizer runs in a horizontal sliver instead of taking up the entire window. - May 2, 2009 by The Vazel

never seen before - hey my friend.. you will not believe it.. create my account only to write a rate for you! The best of i'll have ever seen bevore! No joke.. i like it! That meens in german : FETT! Coll look and execution! greet, longface - November 21, 2008 by longface facelong

Loved It - This has to be the first visualisation that i didnt turn off after 5-10 seconds :) It ran fine on my Geforce 7700go.I would use this all if it would work on my second display.So maybe secondary display/dual monitor support might be something for your next version? (including widescreen resolutions)other than that, worked like a charm. Great work! - May 4, 2008 by Richard O'Connor

It does not work on my computer - I have a brand new computer that runs Vista Premium. So I should be able to handel the geometry part of this plug in. It looks very good from the pictures. I hope that this bug gets worked out. - December 12, 2007 by John Drysdale