This is a visualization based on the Mandelbrot Set fractal. Prepare to be mezmerized. Version 1.0 is vastly improved from the beta version and includes configuration and several display options. Different resolutions and screen sizes are available through the different modules. Also check out the kaleidoscope mode! Requires DirectX 9. 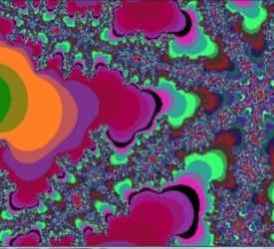 This runs reasonably well though i couldn't see where the fullscreen mode mentioned was. It provides basic support required for integration into modern skins which is nice to see. Mandelbrot's are so old yet still nice to look at from time to time ;)

Crank it up! - Very low contrast. Guess, Author cranked his monitor way up during development, so compensating to much brightness w/ to low contrast. The operation is not windows-conform. Otherwise this plug-in is a good idea! - October 18, 2006 by Rolf Caesar

Found It! - My apologies, Steve; I found the features described in the description. For anyone who hasn't figured it out, the Fullscreen, Kaleidoscope, HiRes, etc., features are available as separate modules in the "Plug-In Module" selector, which is the drop-down box on the "Select Visualization" option screen at the bottom, just above the Start, Stop, Configure buttons. Thanks again for a totally cool fractal vis! - December 14, 2005 by Eric Rymers

Beautiful! - This fractal viewer is way cool! Who doesn't love fractals? I don't see the fullscreen view, either, but I doubt it could run very well as the small version munches so much CPU already, can't get more than 4-7 FPS during some of the really complex image calculations (even on 3.4GHz P4 w/1GB RAM.) It would be nice if the GPU could be utilized to speed it up, but I don't know if this is possible. Keep up the good work, Steve! I can't wait for the next version! (full-screen, kaleidoscope, multi-threading, etc.) - December 6, 2005 by Eric Rymers