You might like this. 3d visual, you need a good 3d card (nvidia cards are better since it's with openGL).
check out the readme file for the commands (like beat detection and more... )
I'm not working anymore on liquidtrixx, but i will try to put all the other versions on my site asap. visit me at http://liquidtrixx.org 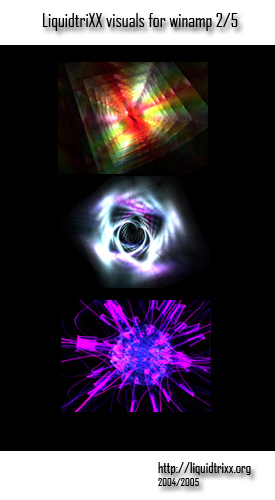 Running on a GF4 card, this runs at a decent 60fps. The effects aren't too bad but there doesn't seem to be a way to alter/create new ones which does go against this compared to other vis plugins out there now. The support for the Winamp 5.x skinned frame and related integration was noticeable when running this.

Ehhh - Only plays in FULL SCREEN mode.I uninstalled it right away. I like the smaller visualizers. - November 30, 2007 by Barry `Stulberger