Accurate, detailed, customizable spectrum analyzer. I decided to resurrect this plug-in that I originally coded in 1998. 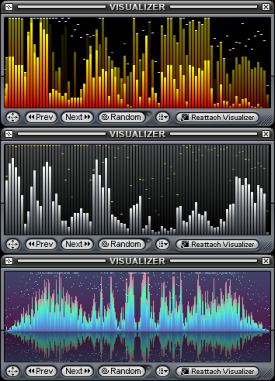 A classic spectrum analyzer that doesn't leave you wanting for more.

A wonderful, accurate, customizable spectrum analyzer. It really is classic, too-- we first saw this thing way back in 1998.

I like this plug-in. Very much various colour motives. - February 8, 2010 by Mysterious Art

Does Not Work in Winamp 5.551 - This appears to be an old plugin that once was famous, but now needs to be updated or deleted. - April 19, 2009 by Bruce Houston

Wonderful and useful - Very useful tool. But if only it had some shaping options on analyzing signal like A-B-C-Flat shapings. Sometimes the band bars rize too high and screen cuts the bars topmost. Also all the settings are fancy but more simple presets would be good. Wonderful and very useful. - March 24, 2009 by Onur Kilickiran

nice and usefull - This is a great plug-in. It takes the visualization concept back to basics: what is happening in this song?I would like to suggest an additional element: optional xy axis displying frequency(Hz) and volume(db).I recently started to have an issue with this plug-in though. It kicks my cpu load to 100% and it doesn't load. Anybody as some idea of how to solve this? - December 16, 2008 by ilikesound yesido

Good job! - This is a well done plug-in with a lot of possible configurations. It complements any skin (after matching the colors - which is easy) and gives a nice touch of hi-tech to Winamp.I like lots of options, and they further add to this plug-in's awesomeness. - November 5, 2008 by Paal Nilsen

Best Spec analyser on Winamp..BUT - Worked great with previous winamp, but on two different computers running on XP, neither will play it now that I upgraded to latest wiamp...Thanks CBS...for screwing up a good player. I dont like the aol radio list on it either!! - July 10, 2008 by Michael Sullivan

Excellent - This plug in is excellent. Though it gave me a few errors initially but bugs are inevitable. Overall I would rate this excellent and request the creator to improve it. - May 17, 2008 by Ravi S.Maniam

nice and best - this is best Classic Spectrum Analyzer - April 11, 2008 by soon peng

Yeah man, top banana - Cant fault it. Its quick, accurate and useful. It can be matched in any colour to correspond with any skin, layout or OS. Mike, matey, youve done us proud. - April 1, 2008 by James Bowman

Not far from perfect - This is what Ive been looking for since 2 years. Does exactly what a Spectrum Analyzer should do (and, by the way, in constrast to many others analyzers around here with correct maths!). Also highly customable.Dear Mr. Lynch, at least I would rate it 5 if you could make the height of the plug-in customable und extend the possible range of the different values. Some people may like "real" old school analyzer, wich means ohne 6 or 8 bars -> Bar width + spacing... - February 17, 2008 by Retronade -

awesome - this functionality should be built into the modern skins, but this plug-in solves that problem.anyone else think it's funny that there's an 'aurora borealis' profile and a 'northern lights' profile? - January 11, 2008 by a b

SIGH... - *Real* audio spectrum analyzers are supposed to have a *logarithmic* freqency axis.Analyzers like these (and all other spectrum analyzers for Winamp I've come across) with a linear frequency axes make pretty pictures but since 90% of the action is in the leftmost 10% of the display, they certainly cannot be called accurate. - January 1, 2008 by freakin' dutchman

AWESOME!!! - OMG! This is just the thing I have always wanted for the new Winamp!!! I have been using winamp forever and the one thing that made me love Winamp back in the v2.xx days was the fire style analyzer and ive always hated how the new winamp versions lacked it because it just looked so cool. Finally it has been brought to the new wimap and Mike I cannot even put into words how awesome it is! There is more options to mess with than I ever could of asked for. Thanks so much for creating this! SUPERB WORK!!! 5 Stars. - December 31, 2007 by Brandon Kramer

LORD 'AVE MERCY!!! - I only just registered just to give this the five star rating it deserves. Sits inbetween the bento player and the album list2... and I got this warm tingly feeling inside now. Nuff Said!! Respect - December 20, 2007 by mad duke

Good Stuff - Fits in place of Equalizer after it's set. I use classic skins. - December 9, 2007 by Mike Burns

Solid Old-School Plugin! - Quite a few options for this type of vis plugin. Had no issues downloading, installing or running the plugin!I gave it 4.5 ****.* due to color editor having room for improvement, aside of that little annoyance I would highly recommend it!Rock on!!! - December 1, 2007 by dal kovac

Retro :D - Good-looking and highly customizable spectrum analyzer that really freshed up my Winamp.Haven't had any problems with it so far on my machine running Win XP Pro SP2 with Winamp 5.5. - November 24, 2007 by Platypus Pedersen

This keeps crashing winamp - I really like the plugin - want it as my full screen visualisation but keeps crahing winamp! please can someone fix .... - November 20, 2007 by jack scriven

Excelent - Great spectrum analyzer. I use it for pro audio purposes.The only thing that bothers me a little is the lack of "auto attach resize" funcionality. (Like the Gamut 2000) - October 18, 2007 by Alberto Del Trueno

Very Slick and Clean - However, WinAmp/AOL 5.5 does not like it. I was able to use it up to this point. Perhaps our friends at WinAmp could take a look into it. - October 17, 2007 by Steven Gonzales

Amazing! - Really cool plugin! All what a analizer needs. But it always crashes. - October 16, 2007 by NikoMitDaMacht n_a

spectrum analyzers are boring - amazing. simply, AMAZING. im use to pro-audio analyzers and this one has that live feel. great job! - October 16, 2007 by Joshua Marks

Just the thing I was looking for - Everything is great, I really wa happy to find it. But Winamp(5.5) crashes most of the times if I try to configure the Analyzer! Hope there's a fix for it! Good luck :) - October 15, 2007 by Indrek Palm

A Classic Indeed - I have had this vis plugin since 1999, on a win98se machine in college, I have run it on many machine since. A few weeks ago I purchase a new hp amd 64 bit quad core monster running Vista Ultimate and with a little coaxing I have the original sexy attach analyzer [vis_statan.dll] running on it as well(I'm a computer geek, oh, I official go by "Systems Engineer" but computer geek will do). it's like a old friend. - October 13, 2007 by Wayne Hughes

Just Great - been using since ....? until it starting crashing previous winamp versions. Now this new version seems to work like a charm. This plugin is the reason i'm using winamp again. Should be a standard plugin. Great job +++ - October 10, 2007 by 6p4ck b

Wonderfull - Been looking for something like this for yrs, now i have it i'm one very happy person. Superb spect an' great work... - September 27, 2007 by john smith

Very stylish - Thats nearly the best thing you can find here to plug in your winamp ;) thats stylish, works on a slow cpu and may be configured very detailed! VERY GOOD WORK!!! :)Jonathan - September 25, 2007 by Jonathan Weber

Works great and looks fine. - This plugin works great and works nicely.I made a mirror for the plugin for those who cannot download off the Winamp SiteIt's at www.files.zerobrethren.com - September 15, 2007 by Alan Lay

It can't install ! - When i downloaded this plug-in and start to process installing,It say "c:\Documents and Settings\Desktop\Classic_Spectrum_Analyzer is not a valid Win32 application". - September 12, 2007 by Yang jian

Can't Download It - You get and error everytime you try. You get this.C:\Users\(your name)\AppData\Local\Microsoft\Windows\Temporary Internet Files\Content.IE5\0UY8FCBX\Classic_Spectrum_Analyzer[1].exe is not a valid Win32 application. - September 11, 2007 by Tim Kovalcheck

Download is broken - Looks great and I want it.Fix the file and download mechanism please. - September 7, 2007 by Grail Knight

nice looking - it looks really good , but getting the same error "not a valid win32 application" , hope it gonna be fixed soon .. - September 6, 2007 by opal opal

Bad file - This looks sweet but Winamp/AOL has messed it up so no one can download the file. - September 5, 2007 by Mark Brown