it's funny and it's got a girl!

it's funny and it's got a girl! 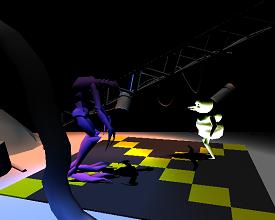 Installed easily but alas i don't have a graphics card which supports the (pretty high) system specs required. Average review applied as a result of the inability to test...

useless - I have intel xtreme graphics card and still the thing wont run...what the hell do you need? something from outer space? - November 12, 2006 by Shadow Mistress

requires too fast video card - It requires a new video card or it won't run. Too bad. - January 9, 2006 by Sleepwalker Designs

Its a start - Its a nice start, But how do you get them to move? The beat detection seems dead. The dance floor and spotlights flash (not to the music) but the charactors dont move at all exept when I chang their position. Tried changing the settings for their bodyparts and with different dance music but got nothing. When the music stops the entire plugin freezes up until you start a new song. Once fixed and modified to work with more gf cards this could be a good plugin. - December 18, 2005 by Michael Jewell

Be a choregrapher - You have a big fat overpowered graphic card (and mostly which can handle vertex/pixels shaders 2.0) and you still want to make it suffer while you are not wasting your time playing vid?o games? This plugin is for you!! You have two creatures which you can change at will who will dance on the rhythm of you favorite mp3. You can control their arm, chest, head... to move in the fashion of your choice. You can change their colour, the spots colour, the dancefloor appearance... and so on. This is really fun. (Try it on a fast rhythm, it's great) - June 29, 2005 by Taoa Taoa