BeatHarness is the ultimate VJ.
It uses images, videos, live-camera input and scriptable(!) effects & transitions.
Use your own videos & images in the effects by copying them to the right directory !

Best suited for loud music and big parties - techno/trance/hardcore will do :) 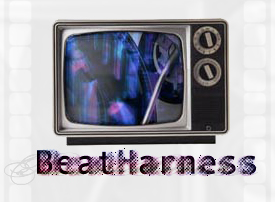 This is definitely one to give a go. There's even a funky 70's style coloured disco wall included which is a must have. Using normal style presets to image merged ones and other effects, this has a good range in midst of other heavy weight visualisation plugins out there. Only issue noticed was that the window gradually moved down the screen between opening/closing it otherwise there were no other problems.

Go on, give it a go and make sure to check the plugin's website!

stroboscope ? - This is a really great AVS !! But just wanna know if it is possible to turn it into a kind of stroboscope ? (which would display a white screen when there's bass and otherwise a black one) That seems really easy but I never found that before ! Thanks MoH.Soldier - June 19, 2006 by MoH Soldier

Worthless for the status quo - Here's the deal; If a plug in won't work except with "the latest" fancy audio hardware, it is garbage. I have an NVIDIA card, not the 'latest' but it is decent enough to work with a viz plug-in made by a CONTIENTOUS author. Most people, whether you like it or not, do not have the equipment to make something like this work. So (to the author), what are you trying to do; change the audio hardware market, or just make a decent plug-in that EVERYONE can use and enjoy? - May 26, 2006 by Noah Burge

didn't work.... - This vis did not work at all and attempting to visit the website was a moot idea. I was terribly disappointed. I expected a lot from this and didn't get it :( - March 21, 2006 by Alicia Cram

Great Work - Both simple in use and advanced in available uses. This Visualization Plug-in has it all. Nice Work. - March 15, 2006 by Chicken Boo

Beat Harness - One of the better Visulisation plugins. - November 19, 2005 by Andy Pryce

wow wow wow triple wow - Ok guy`s and girls this vis is the best i have ever seen, well done to boy`s and girls at BeatHarness, i have been using winamp for the last 4 or 5 years at least and in that time have seen many good and very good vis`s and some very well rubbish one`s, but this little sweetie is FANTASTIC, but i must stress you need a pritty good system and a webcam to get the most out of it,but am sure if you`re pc is not on top am sure if you tinckle with settings you will get it run like butter off a hot knife smoooooth THX JASE KIRK................................ - November 12, 2005 by jason kirk

For almost 10 years Geiss was the best - The first visualization to beat Geiss... the core visuals are not better than Milkdrop but this plugin draws on all your favorite videos, pictures plus live input and the collaberative effort makes this the best visualization for Winamp. Be sure to get the full version at his site after you try the minature version from Winamp.com - apparently plugins here are limited to 2 megs and the full version is much larger but still free. I checked for spyware and it seems to be clean. NextGuard = PaulfromAtlanta - April 27, 2005 by next guard

Beat-Tastic! - Great visualization program! Be sure to try the desktop mode, which sets the visualizations as your desktop, behind your icons and anything your working on - very cool! - March 31, 2005 by Lanyon Clute