Ten years of AVS, time to take a look back. Thousands of presets were released, most of them remain unseen, even by the majority of fans. With Our Decade, we want to bring some of them back to your memory. This first installment focuses on the years 2004 and 2005. 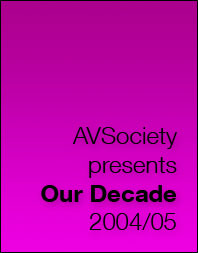 these are the most techy, the most stylized and the most fluid presets from a very productive part of avs history some of it will be very familiar for fans;)

probably the peak years for the art that is avs - February 11, 2011 by The AVSociety