This skin goes with the Blue and Silver XP theme.

The skin does alot of neat things-

Resizes to fit on screen, slides to the right to hide.


snaps to the edge of the screen, Animated Eq cover, and More.

Leechbite Added the snap to edge and also tweaked the skin.


Thanks to Pete Clark for window elements!

Quad - Graphics and all other coding. 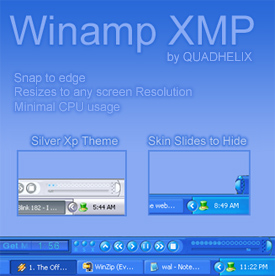 Not the most original idea as there are a few toolbar skins already around, but well executed. I'd have like to have seen the media library frames and so on look more like default windows to fit in with the whole windows theme.

Really nice =) .... But .... - it really need a move wide variety of kolorsy hace a green - red- n black skins in my windows n this skin does not fit in blue or silver u.ueverything else is a really awesome work. - September 3, 2008 by miguel veliz

Really Compact - The first thing which attracted me is the compact nature of the skin as it is made available from the edge of the screen which is easier for me to bring it front.And it is really helpful to me in the compact feature.Next thing which made made me to feel regret is the the display in media library and playlist editor.Playlist editor may also can contain the total time of the playlist - September 3, 2007 by Madhesh Kumar

Awesome! - Ever since coming across this skin, I have been using it. There are other toolbar skins out there, but none as functional as this one. The "Hide" feature is great. - July 23, 2007 by S M

Excellent ! - I was looking for a skin that could be always displayed on top and that does not take too much space on my desktop, now I found it !! Parts that can be improve : - Winamp cannot be moved to a second screen (I have extended dual screen) - Maximizing another windows goes behind the player, it would be nice if the bottom of maximized application would stop before Winamp. - May 15, 2007 by CESAR AILHAUD

OK, but... - I like the design, but the text in the "Silver XP" mode tends to be excessively hard to read. Also, it looks more white than silver (unlike the preview). Might use it, but I prefer iPlay's minimize-mode for simplicity's sake. - November 25, 2006 by Jessica Tok

Very Well Done! - This is an outstanding skin! I've been using WMP too long; and was hoping to find something that looked just as good. Thanks for giving it to us! Neo - August 7, 2006 by Justin Payne

This skin rules! - I really like this skin. It's by far my favorite after looking at many of them. The best feature is the way the bar hides. And it's very easy to read and use too. This skin is so good I registered just so I could give it the 5 stars! - July 1, 2006 by Tom Rinker

Great One - This one is very cool I like it you can put it on the bottom out of the way of other webpages and still have your music as you do your work or play games. - June 24, 2006 by Grim Reaper

Perfect!!! - A perfect match for WinXP. VERY nice and sharp looking skin. What more can you want? -It snaps to the taskbar -It can be set to be always on top of other windows. -It can be minimized (more like compacted or contracted). This will be my primary skin for a very long time. It's just so convenient, small, and all of the buttons are easily recognized. This is exactly what I've been looking for. Beautiful work!!! Much kudos! - March 25, 2006 by Steve Katz

Just Great - Yea man, this skin is just GREAT. Very discreet, you can keep it on top anytime, and if its annoying you, just 1 click there it goes very small on the edge of your screen. Good job QuadHeliX, the best skin so far. - March 22, 2006 by Charles Ward

Good implementation - Good implementation of a compact player. Sits nicely in the corner. Off course I have my compaints, but you cant get everything exactly how you want it. I'm happy with it. Thanks. - December 23, 2005 by Damien Bezborodow

cool idea, not very practical - would be better if it could be integrated into the taskbar, or if it was not as long. - November 5, 2005 by jo c

Great skin - A great skin, probably one of the best i've ever had if not the best. IF you use it right, it's exceptionally great. extremly great dessign. And it doesn't look like allt the other standard designs... - November 2, 2005 by The One

This rules. - I love this skin. It integrates with XP so well that it's like part of the desktop. Here's a trick, for those who don't actually know how to use this. Set the opacity to 50% (or more or less, depending on your preference) and then check the opaque on hover. This works well if you always want to keep your browser status bar in view. I love this skin. 5 Stars. - October 6, 2005 by Dark Groove

Finaly Somebody Got It Right! - This is a very cool winamp skin. I like the slim look and the way it hides away. The Silver Xp Theme needs the lettering in a darker color but other then that everything is great. I wish more thing in life were tihs useful and cool. - September 13, 2005 by William Burns

winamp xmp - i dont know what i have to put here but i only want to let you know that i very like this winamp version - September 6, 2005 by harry wagner

Too much - Too much of this blue color. Too much advertisement. Too big windows. I don't like it. - September 5, 2005 by Joachim SchochBoesken

Terrific and Pleasing - I've got the XP Crystal wallpaper and it matches perfectly with this skin. Great functionality. The earlier review suggestion to make the opacity 30% makes this skin even more subtle and magical. Great job! - August 14, 2005 by Glenn Huang

Winamp XMP - its good cuz it doesnt take much space on your desktop adn you dont have to bother with minimizing it all the ime its in the way - July 27, 2005 by Victor Interiano

Awesome - This one will stay out your way, and doesn't cover any important bottuns when always-on-top. You can continue your work or web-surfing with ease. - July 23, 2005 by David Watts

Just great! - I love this... even more when i set the Windows Settings -> opacity -> opaque on focus and the opacity to 30%... Place the player just above the Start-tray - and when u click on anything els but winamp - its shades down og the windows u use in the back comes out... just a greate skin - I love it!... but It could be fun, if the playlist could be "minimized" just like the player itself... maybe even make it possible to "maximize" it by just pointing the mouse to it!!! But still - IT IS GREATE! - July 13, 2005 by Dan Johansen

Winamp XMP - Could you make that the Playlist toggles open when one clicks on the bar with the songtitle? Because the bar is more huge than the tiny Playlist button :) Thanks in advance. But since I am supposed to rate the skin I will add great work! - July 13, 2005 by Bingo Bongo

Thanks to ALL!! - First of all thanks to all that have downloaded this skin. Thanks for the kind remarks! When I designed this skin I wanted something to work seemlessly with my desktop bar, ease of use was the issue. I use this skin every day as I hope you do too. - July 7, 2005 by QuadHeliX Barber

Slick - I love this skin... I was looking for a simple non-instrusive skin and this is it. I dont heavily customise my scrren themes but I do work at my machine all day and love the way this seamlessly becomes part of my workspace! *bravo* - July 7, 2005 by K Lawrence

My Favorite - This is my favorite skin. I try out all the new skins, but this is the one I keep coming back to. It's clean, functional, and easy to use; simply the best. - July 6, 2005 by Thomas Bryner

The skin you better keep hidden - Well yeah, it's got functionality, but did it ever occured to anyone that this skin is UGLY? Poor contrast, poor color choice, poor font shape and size choice, poor button design. Too bad for those nifty features, I won't use it. Simple doesn't have to mean ugly if you know a bit of design skills. Check MXP for instance - it's not a great skin, but at least it fits perfectly the WinXp colors, contrast and style - which this one doesn't. - July 1, 2005 by Sam T

Exellent Skin - This is such a cool skin as u can hide it in the corner and it's aslso easy to use Exellent - June 28, 2005 by Sean Mitchell

Suggestion - I liked it a lot. Blends with my desktop at work! ;) Suggestions: 1. Could have provided more colors like black etc. 2. Would be perfect if it can become a part of the taskbar like windows media player when minimized. - June 25, 2005 by Veena K

Compact, Visible, Fully Functional - This skin is very readable and fully functional, yet compact. In a space the size of the taskbar, it houses the display, play controls, volume, equqilizer, and buttons for the library, playlist, preferences, etc. This skin slides out of the way, and, on my screen, still allows access to the bottom slider button on the underlying window. The theme matches the windows xp theme fairly well, though the media library and play list could be made clearer and a little more asthetically pleasing. On the whole, a great compact theme. - June 20, 2005 by Monty Bar

thanks - I will try that, does it not go together or what? Hope you like the rest of the skin. - June 8, 2005 by QuadHeliX Barber

GREAT - Finally! The proper exicution of a toolbar skin! 2 things though; if you're not running one of the standard WinXP themes, then the skin won't go with you desktop. Second, and more of an annouance then enything else, the themes choser doesn't change colour with the rest of the skin. Actually 3 things, can we get an option to just have the main window always on top? - June 8, 2005 by Michael Braedley

Now HERE'S a toolbar I will USE! - Well done! So what if it's not wildly original or different. There are plenty of those skins, but have you ever tried to use some of those? With some skins, "different" means "DIFFICULT to USE"! Your skin does the basics, and does so with style. It integrates well with the typical XP desktop. It'll be a 5-star skin (instead of 4) if you can make three small improvements: 1) The main "bar" snaps to the right or left of screen, but not the top or bottom, 2) the other windows don't snap at all (with each other or the screen edges), and the other windows don't change to the "SilverXP" skin. These are just some little requests from a user. Other wise, GOOD JOB! - June 8, 2005 by Crunchy Frog

Good - I think you should make the skin for the Silver and Blue Theme in WINXP Seperatly. - June 7, 2005 by Ahmad Hassan