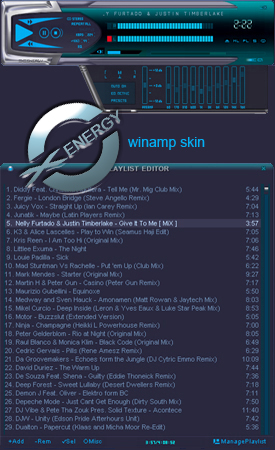 THIS SKIN IS SO HOT!! - This skin is OUTSTANDING! I love it. And, not to mention... purple is my favorite color but this skin is marvelous in all its aspects. Thank you! - January 6, 2009 by Crys Smith

Good looks, great function - This button layout is MUCH better than the usual row of identical little rectangles. The best design I've seen in almost 10 yrs of using Winamp. But I have two quibbles:1. The clickable area of the PAUSE button doesn't include the right side of the circle. Sometimes I need to pause the music in a hurry and I don't want to have to hunt around for the part of the button that actually works. Can you expand the clickable area to include the entire visible button, just like the STOP button? 2. Other people have said it already: more color themes please! I like having a dark background, but having red/yellow/orange/purple foregrounds would be great. - September 30, 2007 by _ Almamun

Very good skin - My only complaint is the playlist color is hard to read brighter color would serve well other than that its great. - September 12, 2007 by Matt McBride

Nicely executed - But I want more color themes, and I wish the spectrum analyzer/oscilloscope was expandable. Apart from that, well done. - July 26, 2007 by Shang Chi

Really cool - I do like this one a lot, but I would have preferred it to be a bit smaller than it is. Nice amount of work gone into it. - July 18, 2007 by Daniel MacDonald

Excellent - Amazing Skin So Crisp And Clean Keep Up The Good Work. - July 16, 2007 by Darren Leeson