based on Windows Media Player 11 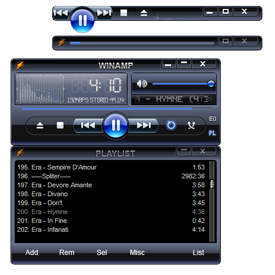 Yet another wimp11 skin, there are more of these on here than I care to count.

it fits perfect! well done! - Just perfect, if you want to make the best player looks like the worst, then... nice! - January 23, 2008 by Jesus Azpurua

simplicity and functionality at its best - People who shy away from windows looking things are silly. This skin is non-nonsense slick and fits well in the windows environment. Far too many skins just look cool, but when u come to use them they are a pain. This is V nice to use. nice 1 Vadim Zhukov. - October 26, 2007 by Jeremy Comer

does not wrok for me - Hey i downloaded the skin and extracted to winamp/skins but all i get is the classic skin - how do install - September 12, 2007 by Hussein Dhanani

Looks great - Thanks! This is really looking great! It`s one of my favourites of all time. - August 31, 2007 by Chris Wills

Cool skin - Only thing I would change is make the scrolling song name area larger, or move it above the prev/play/next buttons. - August 8, 2007 by Adam Brock

Cool! - I like it a lot, especially the Shade Mode. I've been looking for something like this for a while, and I finally found it. Thank you! - July 28, 2007 by Andrew Catluvr2

Doesn't work - When applying the skin, Winamp keeps at the classic skin. I am using the newest winamp version. - July 23, 2007 by Lazer erazer

Very Nice - Excellent work Vadim. I choose your skin as my most favourite. - July 10, 2007 by matej pollak

Excellent! - This is the best WMP11 skin I've ever seen.Yes, there are some problems, but hopefully it will be corrected. The only thing I miss is the time indicator in the bottom of the playlist window (selection time / album time). Unfortunately most of the skins don't implement this feature. Sometimes it is VERY useful to see the total playing time.However, congratulations! - June 5, 2007 by Steve Stanley

Good skin, but could be better imo - it's an excellent skin, has a great design, there are only two problems I have with it, #1, the text under the time indicator is mushed together (between certain characters there is 0 space, which makes them hard to read, and #2, it has no color schemes. I think it would be great if the colors could be customized through a CMYK sliderset (then again, I think all skins could benefit from this, even if they already have color presets) - May 25, 2007 by Jon Joy

Wow - I made a comment on IRC regarding how there aren't many good Winamp skins (that I thought) and somebody linked me to this one.WOW! It's my default skin now. Please keep updating it! This is the best one out there imo. - May 20, 2007 by Aaron Secret

Very nice. - Like the design (it replaces the \"nullsoft media player 10\" skin I was using right now); the only thing that confuses me are the three identical-looking buttons in the equalizer-window. - May 6, 2007 by Jan Bartmann

4/5 - Pretty nice, I like the look - it goes with Vista nicely. Very elegant look. My only criticism is that the compact mode could have had a volume bar. - May 5, 2007 by Scott Carey

Great Skin - I like it works great, and looks good also - April 9, 2007 by Michael Lindsay

Gorgeous, but... - Would you be able to add a shortcut to the media library in the next release? I love it otherwise, it's so slick looking! Well done! - April 8, 2007 by Matti White

Nice - My favorite so far. The dark gray highlights in the playlist editor and media library don't stand out enough for these old eyes. An option to change this to the blue used in the main screen would make them stand out. - April 7, 2007 by Eddie Williamson

black! - I love dark skins, and I use a very high resolution so the size of this skin is great for my settings. Awesome skin - aesthetically and functionally. - March 26, 2007 by Christy Grimes