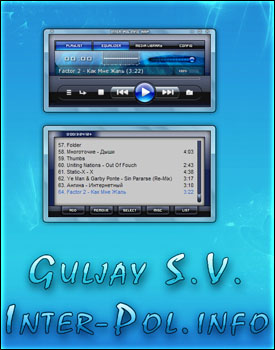 i love it :D - but i still cant figure out why it wont install on my wmp version 5.53 in my Windows Vista Business and Premium. i wonder what im doing wrong. :(it just saves on a temporary folder, then asks me if i trust it, i click YES and then im switched to the wmp. but with the classic skin :( boohoo. - May 5, 2008 by abelle dorothy pabilona

Nice work! - This is a fantastic looking skin that's simple to use. I would give it 5 stars but it breaks when I try to listen to internet radio. Really nice work though, this is my favourite skin. - February 16, 2008 by Jamieson A

cool - Very good skin! Thx for that. I have a request: pls make the playlist attachable to the main window like the normal winamp modern skin for example. It would be great!Greetings from Hungary! - December 31, 2007 by Molnar Peter

Exellent - Very well made.Only gave it 4.5 rather than 5 as window resizing is laggy and the library window doesn't 'look finished'Other than that, very nice skin! Recommended!! - October 8, 2007 by Harry Marshall

Looks Good, but that's about it - This skin looks very good, a lot better than a lot of other skins I've seen, but none of the windows attach to each other and when you click and drag to resize the windows, it is very hard to do. - September 9, 2007 by Tony Armendariz

just like windows vista design!!^^ - I listen to Korean music a lot and I was wondering if anyone know how to make Korean in streamline don't get messed up. I got language pack but it only converts menus and option to Korean. If anyone know, please tell me what to do thru my email or comment here - September 6, 2007 by Shawn Lee

I love this skin - It's simply, elegant and easy to use.Contrary to some peoples reviews. This does dock the play list and other windows. However the docking works a little different. There is a gap of 20 or 30 pixels between windows.. (like in the picture of the skin) after that the forms will stay together.I'd like to see this gap adjustable as I am not a big fan of the gap. - August 31, 2007 by Andrew Love

CONGRATULATION - The skin is looking very good. But when i am listening shoutcase radio, the skin has failure. It is not working on radio. Is there a solution for this problem? - August 24, 2007 by A NIZAMOGLU

Stylish but lacking - None of the elements are dockable to one another. If i want to move Winamp, I have to move each part individually. A hassle. It looks nice though. - July 12, 2007 by Patrick Lloyd

Awesome - Nice and clean! finally a skin thats blue that is actually readable. Can't get the player and playlist to dock though - May 16, 2007 by chris gruber

10 is more like it - Excellent skin, looks great and the features are simple and easy to understand. the pop-up media info is the icing on the cake. - April 23, 2007 by Garth Caesar

awsome - the skin is great but one little thing, is there a way to have it on the screen under windows but yet have the mouse cursor go over on top of it? I have to have my winamp on Always on top but I dont like it that way. Is there a way to fix that tiny problem. only way I have to have it is, minimized it to my toolbar on the right hand corner. I hope this isn't too much of a problem to fix though. But other than that, I love the skin. - April 21, 2007 by Kyrie Levant

CRASH WHEN STREAMING RADIO! - Insanely beautiful skin... though it crashes when you want to listen to shoutcast radio stations...!!! Fix that up pleasee ! thanx - April 14, 2007 by guytch valois

sweet skin - this is the coolest one i have seen yet. I like the skins that look like windows vista. thank you - April 13, 2007 by kyle smolinski

Hot! but cool... - Really don't think I could ask for much more from a skin. Its clean. Its pretty. Its very functional and practical. Great job! - April 13, 2007 by Eli Szus

Cool man - Wow, this one really looks like WMP11 on Vista! Oh, btw I have some troubles about the notifier though...it took too much of my resources when I close Winamp...will you fix it? - April 12, 2007 by Dipo Santiko

Very good..but - The skin is very nice to look at. good eye candy. Only problem I find is resizing and attaching windows. Resizing is incredibley hard to do because the borders of the windows are really far apart from eachother. - March 31, 2007 by Matt Davis

Best Skin, Streaming Crashes it. - This skin is great by design, but flawed in the shoutcast area. I get a script error when selecting a streaming channel and it reverts to the original classic skin. If you can find a way to fix that, this would be my top choice. - March 22, 2007 by Josh Mackey

Help - I don´t know way but I can´t download this skin. Could you send me it in my email. Thank you. Peter - March 9, 2007 by Peter Hahkovsky

Really looks great... - This skin really looks great. Texts are easy to read and buttons are easy to identify. The half-transparent border looks very nice. It just gives a strange feeling when snapping to the screen borders. E. g. when trying to snap to the left border the window will look as if placed with some pixels offset. Think this is just because of the "effect-border". After trying a lot of other skins: Think this will be my favorite one for a long time... - March 5, 2007 by Mark Michaelis

Outstanding - I've been using winamp for years but this is the best skin I've ever used. I love the way, when the player is minimised, the little window fades up when a new track starts, and then quickly fads away again. Absolutely perfect. Great design, perfect button design. Pretty much perfect in every way. Thanks for making it! - March 3, 2007 by Dave Dom

Awesome, but I want a windowshade mode - This is an awesome skin that matches greatly with Vista...however, it is very annoying to have a big clunky box open just for music when browsing the web...If this skin had a windowshade mode (the mode that is skinny and long), I could fit it at the top of my screen and browse the web with no problems. Please make a windowshade mode for it! - March 2, 2007 by Nick Morris

BEST SKIN EVER - 100/100 For you, Sergey Guljay!! This is by far, the best skin I ever used! I didn't even know it had transparency on the outlines (Borders). Truly great work man! woo! ^^ RECOMENDED DOWNLOAD IF YOUR READING THIS - February 13, 2007 by Victor Villa

An scrolling issue - Wow, thank you for this beautiful skin! I have one issue though... the scrollbar in the medialibrary is tweakin' out. When i open winamp media library, the scroll bars are missing. When i point and click on where the scroll bar should be, i move an invisible bar, allowing me to view info farther down the list. The problem occurs for all the scroll bars and scroll bar viewing area. When i click on the scroll bar veiwing area, the scroll bar appears and moves to whereever my pointer is, but dissapears after i try to click and drag it. Furthermore, there are no arrows for the scroll bar, only gray and glue boxes. Hope this helps, with this fixed i would give this skin 6 stars. - February 10, 2007 by Brandon Pazzi

Brilliant! - One of the best skins out there! - December 22, 2006 by Ananthasayanan Kandiah

lil problem... - when you drag the playlist over the media library, the playlist disappears! only the frame remains... plz fix this. other than that, i use it as my default skin! GREAT WORK! i hope to c more great skins from you. -JP - December 17, 2006 by JP _JingProductions

Very nice! - Very nice looking and clean, however there's still a script error while browsing the media library. Something about a notifier. - December 12, 2006 by Dave Walker