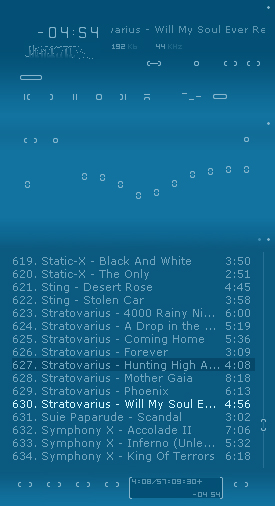 Fantastic - Besides blue being my favorite color, there isn't much I would change about this skin. It's almost perfect. Great work. - April 28, 2009 by Alexys Peltier

This will be really awesome or shocking - I DLed purely on the basis of the screenshot playlist. \m/ Wouldve liked some more colors as blue doesnt suit my theme but it works well overall, i really like the on off toggle style buttons panning is really easy to use. Perhaps have an info pop up as i didnt like the playlist buttons without the safety of rollover info. - April 8, 2008 by Hugh McGown

Great on Vista - Looks great on windows vista, the media library scroll bars aren\'t skinned, but overall the smoothest player out there! - August 3, 2007 by a c

Color - Is tehre a skin like this but with black / dark grey instead of these blu colors? - July 25, 2007 by Z_ippo Bajskorv