Grab it! 4 modes to choose from.

Grab it! 4 modes to choose from.

Introducing Venus for Winamp 3 & Winamp 5. Features 4 unique modes, dozens of color themes, beat visualizer lights and an integrated mini-site for updates, extras and feedback.This initial release is meant to be Winamp 3/5 compatible. But to do that I had to omit some WA5 features that are not backwards compatible. Once a WA5 compiler is released, I will update Venus to a WA5 only skin that incorporates features like the \\\"skin options\\\" menu and notification popups.Enjoy! 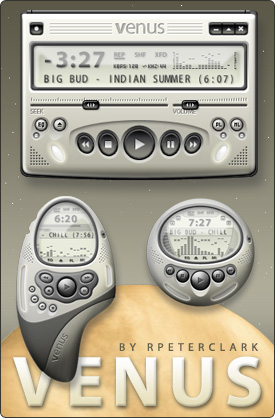 like 4 skins in one! definitely check this skin out

snif - it looks very very nice in the screenshot, but i downloaded it and my cpu simply cannot support it, winamp gets shoked!! *snif* - December 21, 2006 by Kirei Chan

Great Skin - A nice simple stylish retro feel too the interface, the circular displays are particularly good with great use of the interface space, compact well organized with everything to hand. - July 10, 2005 by Frank Dodd

Beautiful! - This is an awesome skin. I LOVE the clean look that's easy to use. With my poor eyesight, the playlist contrast is a little hard to read. Other than that... It's a wonderful skin I'll be using a LOT. Thanks!! - September 25, 2004 by Michael Skurka

An exellent skin - It's functional and easy to use, but it's also incredibly cool...one of the previous reviewers commented on how nice it would be to have a theme to go with it..I use the stardockX programme and (currently) use the KTEK steel wallpapers and desktop items..this player fits in PERFECTLY, but is adaptable to use with other themes too....nice one Pete, keep it up!!!!! - September 12, 2004 by peter lawson

Above and beyond the call of duty... - 4 modes, multiple color themes, well laid out, legible screen text, and it's free? The only suggestion for improvement I could possibly offer is a desktop theme based on it...amazing work. - August 1, 2004 by deus diabolus

Soooo Sweet and Transparency Holds Strong - This is by far my favorite...no reference to some ridiculous new film, no overbearing windows, ugly buttons...with a texture I can almost feel. Lovely to switch between color schemes, but the default silver has a life of its own. Once you find the volume control, everything else is fairly cut and dry...thanks for the skin... - June 24, 2004 by mister frenchie

Original... - Wish I had it in real life... plenty of color themes and original use of 3d effects. The lights that pulse to the beat are a nice touch. Very functional with big obvious buttons.... I appreciate that being as how I often need to have my nose an inch from the screen to see which button is which - June 2, 2004 by Whitney Bell

interesting...but... - it cool with every thing i like the color if u change the color..it suit my desktop, the blinking light and able the change to four mode but the only problem is that the how the hell to change the it into circle mode... - May 14, 2004 by belinda lim

Exceptional... - Generally when you download a "Cool device" The artist creating the device knows where all the creatively hidden buttons are and you are left scratching your head trying to guess where the Playlist button is, along with others. What makes this skin EXCEPTIONAL, is not only the smooth eyecandy, but the EASE OF USE. Everything is up front and recognizeable. No matter what version you are using.. This artist kept with just about the same positioning for all of his buttons throughout the skin so locating buttons after switching skins was very easy.. other artists need to aspire to this level of user friendliness. THANK YOU. -Shockwaveflash - April 25, 2004 by Adrian Melsha

hmm - don't really like it...the playlist is very square...and the color themes aren't that nice lookin'...the lights flikkerin on and off are kind of annoying to look at...i like the round form of the main part though... - March 12, 2004 by petra smit

Lovely, but another CPU fiend - Have to offer my love for this skin, it's undouvtedly lucious. However, just like so many other's, it's eating CPU for breakfast, lunch and dinner. Around 40-50% on an Athlon 1.4. I don't know if that's because of the three-in-one nature, or the beat monitoring flashy things but that sadly is the reason I had to put it down this time. Good luck on future work and updates though. - March 7, 2004 by Ben Ward

Good, but... - This skin is beatuiful and I would be using it, but it kills my processir. I'm taking about 99% of the CPU. That need to be corrected and then and only then will this skin compete with NMD3. - February 29, 2004 by Nate S

Tragic Beauty. - One of the most beautiful skins I've ever seen, but also one of the slowest. I'll keep this one, but I won't be using it regularly -- I like to run other programs while playing music. - February 29, 2004 by Jason McCay

sniff - My goodness, I feel so inadequate after spending so long making my skin and then seeing this masterpiece. Back to the drawing board for me... :) Sean - February 28, 2004 by Sean f

Lovely, but a resource hog. - Gonna keep this one, but takes around 40 percent of cpu-time on a p4 2.57, 768 mb. WhenI try to scale down, the usage jumps to 100. This skin is a bit big for my appetite(applies to almost all modern skins, wish they made 90% the standard). The appearing of this skin is like there is a real device on your screen, I feel like tearing it ouf of the monitor :-) - February 22, 2004 by Sjah _

Me likie - This is one of the cleanest looking skins you will find. Everything is very readable. Even in the stick mode. A lot of care was taken in the shading and buttons. Definitely one of my favorites right up with mmd3. - February 18, 2004 by Abarabusto Barker

Very, Very nice. - The player just looks \"Right\". The color scheme, the shading, the Pulsing white light, even the SHAPE of it is pleasing. It looks beutiful on the desktop, and has tons of Features built in. This is so good it Could EASLIY pass as the Winamp Default skin (*hint*). \"Venus\" is definitely a keeper. - February 12, 2004 by Scott Kuehnert

Script Failure - A good range of colour schemes and four quite different skin options (I prefer the sphere) make this an excellent choice for a default WA5 skin. Unfortunately, although it is supposed to have been updated for Winamp5, it still gives a script failure on closing the player, as is also seen with many skins originally intended for Winamp3, but never updated. - February 8, 2004 by Brian Reeves