The created otaku for otaku

New version and my other skins 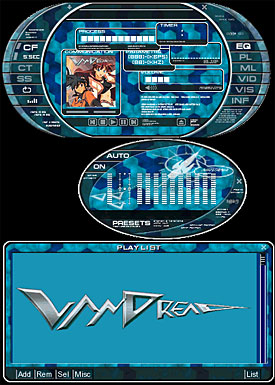 Vandread rocks - I think it looks cool because I'm a big fan of Vandread. - January 22, 2006 by Joshua Shelton

I Love this Skin!!! - This is the best skin I have found to date. I find it's easy to use options to be a great ease on the user. And the slide show is a big plus too. You can set it up to show your favorite characters from the show. And if you are a fan of the show like I am, then I'm sure this is a must have skin for your winamp player. - September 17, 2005 by Johnathan McIntosh

Superb - This isn't the latest version, the reviewer before me already posted that, the black borders are gone in that version. This skin simply rocks even if you're not a fan of the series. It might be a bit busy but hey if you like that, get it ^^, I know I did :) - August 25, 2005 by VenQWish ~nyo

See his web page for update - Well, apparently, this skin hasn\'t received the same update that it did on the authors web page. If you go to http://www.animemagazine.ru/26.04/art_02.php you can find a version of the skin that addresses all of the issues brought up in the reviews that people have provided. It\'s playlist is smaller, the \"black boxes\" are gone, even when alpha blending is turned on, and, my favorite part BY FAR, is the playlist now has the time information on the bottom, like a Winamp Classic skin has. Yay for Ilya! Thank you so much. Not nearly enough \"Modern\" skins include this! It is often what decides wether or not I\'ll use a modern skin. You\'ve just received a permanent place in my book. I almost never use Modern skins (to big, bulky, don\'t include the time feature, don\'t look \"cool\" enough (yes, that\'s an opinion thing), and the list goes on). Thanks to this skin, I might more often now. My one, and only beef is that it doesn\'t have a winshade mode (perhaps I missed it?). However, I almost never use it anymore, so it\'s not a big deal. Thanks again for a great skin. Keep up the good work. Mouser X over and out. - July 29, 2005 by Mouser X

My opinion - Not only Vandread images can be showed at the slide show, but also the other pictures. Do you want to know the trick? Go to Microsoft Photo Editor, take an image, and crop it as good as you want to take, and the dimension must be 72 x 75 pixels. - July 3, 2005 by Feraldo Sihombing

Question - Modernized skin... But something strange the text was updated, and the picture and itself skin - no. It is normal? Or the new version while is checked? Can erase the old version better and begin to rock new? - July 2, 2005 by Ilya Muratov

To those with black boxes... - To all of those of you who are experiencing this "black box syndrome", please go into your WinAmp options, go to Modern Skins under Skins, and click on the Alpha Blending tab. Disable Desktop Alpha Blending (i.e. uncheck the box). This should resolve your black box woes. - June 22, 2005 by Dark Adonis

no title - As a fan of Vandread, and great skins, this is a good creation. The only problem is that the damn playlist is too freaking huge. Not only that, but the skin is to confusing to navigate if someone new were to download it. 3 stars just for the looks alone. - June 16, 2005 by Aero Tech846

nice one! - usually i don'T like anime-themed skins at all, but this one'S different. i like it very much. one star missing because of the mentionned black boxes. awesome concept! - June 14, 2005 by i rontz

Cool man - hey, i was browsing and i came aside this skin. this skin really rocks man and it will rock more when you get to know about its controls - June 9, 2005 by jainesh shah