The new improved version of the best bimmer skin yet. With improved graphics and lettering, a moving EQ drawer and animated layers. Thanks to everyone for their constructive comments on the first version. ENJOY! 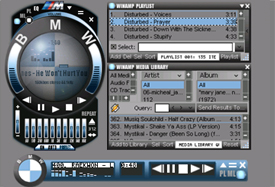 Stick this skin on your winamp, and watch it take off.

BMW? Guess again... - I think the skin is not quite as interesting as it seemed to be on first sight. It\'s quite choppy, and the details just don\'t seem BMW, even though the name of the brand is in huge letters on top of the main screen. The skin works, don\'t get me wrong. but I don\'t like the looks of it. Feels like a Lada. - August 13, 2005 by Pieter Rottiers

cool skin!!! - Downloaded the skin. The looks is really unique and mind blowing, The stylus double sided bar display alondwith middle bar graph is really stunning. The only problem with this skin is that it takes a lot of cpu processing. The processor makes some noise, that means it really processing something. I got a pentium 4 and winamp was taking 67% of its total processing power. But overall its good - March 20, 2004 by Shafiqul Islam

sweet - this is problably one of the best skins so far. is perfect for bmw fans. put it this way is the only skin i use. very complete. good job. can't wait till u make another. - September 6, 2003 by ernesto carrera

Spare Me - Two stars for being BMW, but I might compare this to a Chris Bangle design. Just like they do with their cars now, I would like to bash this skin with a large stick. I can see what you were trying to do with the display, but please try again. - April 15, 2003 by Eric Naeseth

A shame - WTF is this crap?? Looks like ugly american cardesign, not like german elegance. Is that the future of BMW ?? : slaughters like Chris Bangle create bmw's and i waste my time with this skin.... - February 26, 2003 by tom tom

Good Job - Very Good Job Two litlle thing that need to be fixed but overall best skin I've had so far. A litlle dark and replaces the previous version when downloaded those are the only two things that are need to be fixed! - December 20, 2002 by SPETC UKRAINIAN

The Forecast - Yo I think this skin can be appreciated on level's, for bmw fans and people that just like to have cool skins to play music. I can appreciate this skin for the thought that was put into it and for it's user ability. dramatic change from the original. This guy's good - December 17, 2002 by Charles gayton

much better - this one is way better than that other one - November 6, 2002 by cameron livermore

The greatest - All must do much skins like this, hyper-super-mega-giga-best. I'm waiting for AVS like this skin. - November 1, 2002 by Kostyantin Zhytsky

LOVE IT - I LOVE BMW. I LOVE ///M Power. This skin really works, it's nice. It may even replace my Anime Paradise skin for a while. - November 1, 2002 by Jake Frederick

this is ok - it's good. the design is good. it would look better if it was more compact or collapsable. 4 stars for the graphics and the theme. - October 31, 2002 by Bradley Lathan