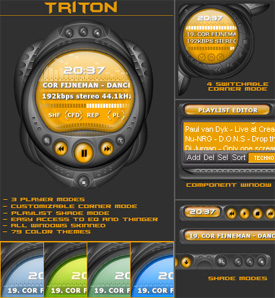 Quite good, like the way you did the equalizer and thinger.

Corner Player and Stopwatch!!! - I really like this skin, it's smooth, it's stylish, and it has 3 modes. The toggle for the equalizer and thinger are perfect, and the colors are great. however, I couldn't find any way to change the color other than through the winamp menu. This would have taken half a star away in my book, but ... I LOVE THE CORNER MODE!!! This is SOO perfect for those who really need maximized screen real estate for heavy graphics intensive visual editing and mixing, like using photoshop, premier, avid, and all those fun expensive programs we all own! Love the skin, keep it up D Robinson! - September 27, 2006 by Kolehshtahn Dehvokahn

Very Versatile - An excellent skin that is stylish and compact perfect for an organized workspace with some small spaces to fill. Nice use of the 'thingy' and great organization of controls and play information. - July 11, 2005 by Frank Dodd

Not quite... - This skin would be fantastic if the color themes also included some lighter grey / chrome, rather than the dark grey / black. This is one of the few skins that uses a corner mode, which I love and wish there were more of. Being so dark, it is difficult to see the buttons in corner mode. I like the look, it just needs to be lighter. - February 6, 2005 by Jim Brice

Very Nice - Love it...one added thing would be sweet :P a drawer that would slide out with the playlist for those of us who dont want a nice shape "design" and then funky rectagle too" which color match as well as design (sweetly done) but dont shapes just arent and attaching a rectangle to the main "below" as i generally have my song list "ruin the sweetness" maybe it made the bottom of main "Flat" and just had create design idea to top and sides but thats touches i will have to look into :) anyway love that glow effect and should be way more like this here versus "bright fruity colors with no point" black goes good with most colors so a black main with lighter colors for other areas work great and "awesome readablility" which i have tried about 20 plus other ones tonight and have deleted like 15 "no joke" so ya a keeper ..well done! - December 21, 2004 by Damien SatansSon

Hella Awesome - Out of all the skins I have this has got to be my favourite one although with the 79 different color schemes I think you may have gone a little overboard. I would suggest that in future versions (if you make any) that you include an easier way to change the color scheme. - October 25, 2004 by Donald Mitzner

I would buy it, if it where a real player! - The colors set are simply perfect! and the hole visual as well. I just didn't liked the corner mode... but anyway, I recomend it big time! - October 24, 2004 by Alex Wolff

mmmhmm - No dought, the Skin is cool, fresh and up to date. But i keep getting, load2u not found. And then the programma Chashes. Not a problem really, but just that you should know - October 22, 2004 by Da_King Sting

Really like the corner mode.... - Its difficult to find a usable, utilitarian, near-perfunctory way, though it also looks fabulous. Really works well on 3d/abstract backgrounds. My only woe is the playist, which is ever-so-slightly off color for the rest, but it dosen't matter seeing as how the winamp color changer fixes that all very easily. In any case, thank you for this, and well done. - April 23, 2004 by BENTON __

OK skin - I have an orgasm every time i see this wonderful skin. In fact, I wouldnt even call it a skin, I'd call it the face of god himself. I strongly believe that this skin can solve all the worlds problems. - December 13, 2003 by Nick Ryman

pretty good - ...you can only see either the thinger, equalizer, or the main window at once.. i like having the option of seeing at LEAST two at one time. **for those of you that thing it's jagged around the edges, enable the alpha desktop blending** - October 7, 2003 by kko n

triton - cool skin, but seems unfinised somehow. all those little projections and they don't do a thing - October 7, 2003 by cobalt dragon

Yah iz coo - its a great skin that looks great! I like that you can change the modes but i cant see the CORNER style buttons, the buttons should be the yellow. other than that this skin is great! - September 7, 2003 by The Homie empire

tried - you get three stars because its a pretty nice skin. I am tried of all these round skins. Round skins dont fit on square screens. At frist the idea was new and edgy it reached its peak in invicta, but it is now time for something new. No more of these unusable round skins. - August 23, 2003 by Elaith Hornblower

It crashes my system! ARGH! - It looks really nice on the site, but I downloaded it and it crashes every time I try to use it! If I could use it, I would give it a better rating. Is there a bug I might have or what is the deal? Sorry, man! - August 2, 2003 by Leslie Hart

where are the colors - great skin i like the dark colors (yellow and gray) but i cant find the other ones - July 12, 2003 by jon b

love it - It is a great design, but i did notice a flaw. The only mode that has an open file button, is the corner mode. There isnt one on the standard or the shade. But other than that the skin is awsome. - July 11, 2003 by ryan barr

Smooth and yummy! - Its easy to read, and easy to use. The graphics are smooth and well done, but not over the top. There is a nice seletion of color themes as well. I also like how this skin isnt afraid to hang out in the corners. I cant find a single flaw, so here's your five spot! - July 10, 2003 by Blue Eagle

4.5 stars actually - Great design (maybe inspired by Invicta ?) and the corner mode kicks ass but you should be able to place the different modes at different places. and it it should be always on top automaticaly when U have it in corner mode - July 9, 2003 by Xixi Trollichou

1st class skinning - This is a great skin! The graphics are sweet and the features rock! Vica always does terrific work, 5 stars!! ;) - July 9, 2003 by Pete Clark

Very Complete - Great skin! I think the main design is better than average... a little less than incredible. But if the reason I love this skin is because it is so damn complete! I absolutely LOVE the corner mode! Great work! - July 9, 2003 by Deeeeeeez Nuts

none - it is a great skin, but xixi, i don't think it's inspired by invicta, both grew up in the forums, and work on this one started well before invicta was released. d robinson, i'm happy to finally see this thing haha. very nice. i'm wonderin if you could help me out with a few things, if ya think ya can, drop me a line. thanks alot man (great color themes too!), peace - July 9, 2003 by Dan Wenner

Excellent - I'm a big fan of your work and i must say you created a masterpeice once again - July 9, 2003 by -Whatsitsname -