Not a picture skin

Not a picture skin

This skin was inspired by the anime Trigun. All of the graphics were done from scratch in Photoshop. I was trying to make a skin that recognizably resembles and alludes to the anime, without being any type of picture skin and without using any copyrighted images from the show or manga. However, since I've used the names and elements from it, it's worth mentioning that Trigun Copyright ? Nightow Yasuhiro / SHONEN GAHO-SHA, TOKUMA SHOTEN, JVC.
Update: Added "Vash's gun" cursor. 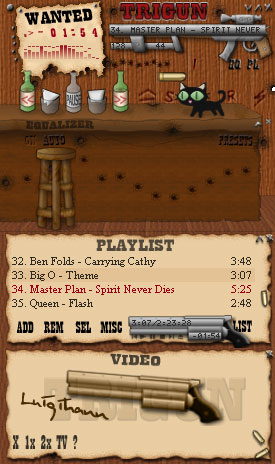 Still not sure how you do it.

You've done it again. Excellent skin, even for one as unfamiliar with the show as I am. The cat. Is. Awesome. And the cbuttons. And the MikroAmp. Awesome. -fm
Decided to keep fm's review after the resubmission. Because I agree. - DD

love the cat! - Awesome skin! the cat is amazing, specially because I like to shuffle through my songs.......... And I love trigun. I could really picture him in a bar like this. - June 3, 2007 by Adriana Becerra

Looks like it was made just for me! - Newbie here.... Viewed soooo many skins and thought, i'll never find one that I want. Then, Magicaly, there it was!!! Seriousy, I'm just a <'Lil Cowgirl> by nature, this makes this skin look like it was made, just for me. Thank you:) wish I could give it 10 stars. Extremley fun to work with! Wish I were, so talented! - January 29, 2007 by Tammy Coulter

About - It's beatiful skin in western atmosphere - June 11, 2006 by Wolver Chumka

Awesome! - This skin definitely is worthy of Trigun anime. Everything is really simple, and most things are humerously worked into the backround itself. - June 8, 2006 by Neo theman

Best non-character skin EVER - This amp works great and it so beautifully done. We are HUGE Trigun Fans and this one captures the show without the characters being attached! Thank you!!! - February 21, 2006 by Alicia Cram

cute! - First of all, i think the design is very cute. It is also very clever, it took me a while to figure out where all the buttons were, (or *what* the buttons were) but once I did I was very impressed. - January 3, 2006 by Lyndsie Clark

awesome. - This skin reeks of amazingness. The animation is done well, love the idea, especially the cat :p The gunshots EQ is very creative. Heck, I love everything about it! And yes, I loved Trigun too. - September 24, 2005 by Tony Tsang

I Love it!!! - MY GOD!! I just signed up to congratulate you! I don\'t usually left comments but this skin is outstanding!!! I didn\'t know it was from a show, I\'m even going to check up for that because the cat\'s awesome ;) Thanks so much for sharing this...you are really really talented!!! Love, Fernanda.- - August 6, 2005 by fernanda bietka

Bang - Very creative! It's nice to see someone take the time to make a nice skin instead of just rushing one out with a popular character thinking it will be rated high for name recognition. - June 25, 2005 by Arch Angel

Awesome - Thats so cool. I always thought the main character on that show looked dutch. - May 12, 2005 by Alex Greyn

Great homage piece. - I really love all the detail you put into this. Kuronekosama as shuffle/repeat is really awesome. - February 16, 2005 by Matthew Balousek

Trigun is Awesome - This is very detail Winamp Skin. The equalizer is the bullet marks on the bar!!! (that to the #2 reviewer who could not fine the equalizer.) The Kuroneko eyes will blink if you click on it. You can move the bullet marks up and down according to your preference. Pause, fastforward, and rewind is on the bar (the beer botttles). Just have to play around with it. One of the best skin I've ever have! Keep up the good work! By the way thanks for sharing. - February 9, 2005 by enzo matric

Gumpmeister - Nice skin,not familiar with the show...its too bad you cant see the EQ...other than that nice job - January 31, 2005 by Gump .

Nice job - I really like the art you did on this, plus I love Trigun so I was happy you made this great skin. All my five belong to thus. - January 30, 2005 by Nick Lindeman