Nokia 5220 XpressMusic offers a range of music and entertainment experiences with the most fresh, stylish designs on the market and so does their latest Winamp skin! Check it out and download it now... 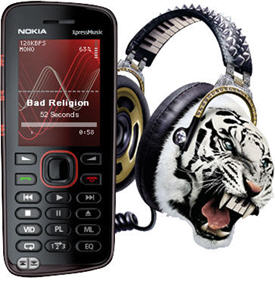 The 5220 is another great installment of Nokia's Xpress Music series now available as a Winamp Skin.

The Nokia 5220 is another great installment in Nokia's XpressMusic series, which is now available as a Winamp Skin. As usual, this Nokia skin has a smooth design with a very well organized layout. You can easily toggle off & on the: media library, preference, & playlist. Great spectrum analyzer & intuitive/simple-to-use EQ

Zoom with a Cool Move - The look has a neat, cutting-edge style and the buttons are easy to identify....and use. This growling tiger is no white elephant. - December 10, 2008 by Richard Coreno

COOL - A rather cool and innovative design. Also, love the work done on rendering the headset/mugs!Respects! - October 19, 2008 by Stephen Wodinsky