Complete with a Turtle Toggle!

Complete with a Turtle Toggle!

Get ready for wall-to-wall TMNT action with the TMNT Winamp skin! On March 23, the Teenage Mutant Ninja Turtles return to the big screen in an all-new CGI action adventure. Leonardo, Michelangelo, Donatello and Raphael are in for the fight of their lives as they face an army of ancient monsters and the mysterious Foot Clan, led by the powerful and enigmatic tech-tycoon Maximillian J. Winters. Jump in and download the skin now! 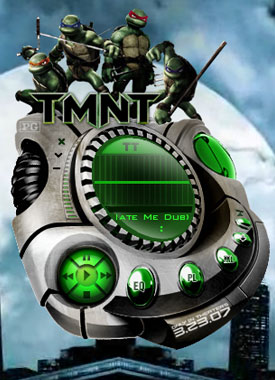 No Shell Game - I like the unique angle to the skin. On first look it may appear "bulky" or difficult to use, but neither comes is the case. This one is a keeper! - June 22, 2009 by richard

Needs Work - To me If i were to use it I would feel lost... It seems a little complicated on where the buttons are but ALL in ALL it is Original - May 8, 2007 by Eric Schaefer

Turtle Power - WOW! what can I say very nice looking skin and if your a turtle fan download it, mind you i am looking forward to watching the film... - March 19, 2007 by Nick Zammit