this skin is based on mclaren mercedes logo and mp4-17d, title challenger of formula 1 season 2003. 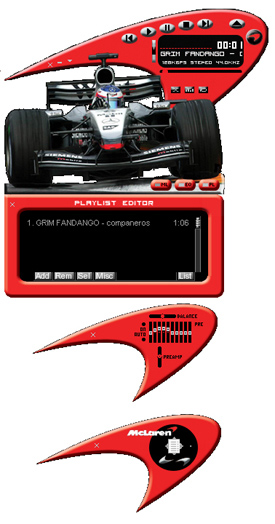 The premier team in F1 comes to the premier audio player. Get yourself into pole position with this great fan skin, a must for all petrol heads out there

team mclaren mercedes mp4-17d - i like to can have this login in th my winamp of my pc of the computer ok very good - August 11, 2005 by Mario Nunuvero

How 'bout mclaren?! - Easy to use, rockin' mclarens' picture. Animation is also cool. So, its real mclaren! - December 30, 2004 by Alexander Demidow

NICE WORK - Although it seems a little "empty" as an appearance it is a really nice work especially for us who work for this "mother" team daimler-chrysler. THANK YOU - September 16, 2004 by pantelis tsiaperas

MClaren is OK - Just one reasen that i give 3 stars. It is an old model of the mclaren there now using de MP4-19B The skin looks good and a good picture of the car. JR Heuwing - July 5, 2004 by jr Heuwing