I present to you Studiosus: a simple, serious and solid skin.

NB:
- Use right/double click functionality on playback icon next to timer.
- Response of VUs can be tweaked by adjusting timers resolution. (Preferences > Modern Skins > General tab) 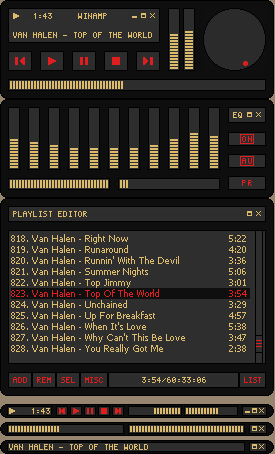 Eye Catching - I have tried many skins but this is the skin I keep coming back too. I find it easy on the eyes and simple to use. There are not a lot of color themes but the ones included are sufficient and done nicely. My only minor peeve is that the led colors of the extra vu meter do not match the colors of the skin. This is a great skin and worth a higher rating than it has. I give it a solid 4.5 out of 5. - September 23, 2009 by tool-dude

This skin made me a Winamp user - Very nice skin!I didn't use Winamp because I could never figure out the app to work with me, due to the confusing designs of the skins (tried several times).The comments here made me dowload and install it, I'm a happy Winamp user now :) and finally get all the options.Love the color schemes, right now I'm enjoying "Transport".Thank you for designing this skin! :D - January 16, 2009 by vix blu

Sleek, minimal, awesome! - This skin is just brilliantly designed. Lightweight, accessible, and yet still visually appealing to me.The colour themes included are all very well done, allowing you to find your very own favourite or just swap every now and then for a refreshing change. The only criticism I could hand out is that it took me quite a bit getting used to the placement of the main window exit button -- Albeit I've gotten over it now it's still kind of bothering me a bit.Overall, possibly the best Winamp skin I've ever used. Great job and thanks, Thomas! - August 6, 2007 by Tomas Olander

Just perfect! - Its so clean and so good looking. This is the only skin I use and will do it forever.Thank you Thomas! - June 25, 2007 by Andy West

Smart, funny, attractive... - ...it's the perfect woman.And it makes a damn fine WinAmp skin. It's subtle and efficient. I'd even argue that it's the ninja of Modern winamp skins. Sure, it'd be a short ninja with very square shoulders, but it's still a ninja.Feels like: Commander Keen 4-6Tastes like: Trench food.Goes like: Japanese mechanicsTry if you like: VGA, frugality. - May 24, 2007 by THUD~* Munkki

Why, Why, Why, Why???? - I don't understand this.Why don't skin developers put an option to stop the text scroll in their skin?Are they doing it on purpose?This is one of the best skins I've ever seen, simple, easy to read without unnecessary bells and whistles.But why force the scroll on users? I don't get it.Shouldn't skins have at least the set of functions that the default modern skin has?Why take away functions from it? If something is an option people can turn it off and on. If it's not even there there's no way to turn it off!So many skins are unusable just for this reason.I hope there's an option to stop scrolling in the next version because it's a shame that there's still another great looking and functioning skin that's unusable.Thanks for listening. - May 21, 2007 by Mark C

Studiosus - Love it. Smooth and not overrun with buttons everywhere. Wouldn't think the dark color would be nice looking on my desktop or toolbar, but it is. Good job. MTLaura - December 23, 2006 by Laura Middleton

Minimal Style - I Just love this thing. It's simple, but the design is sophisticated and stylish in the way jeans and a t-shirt look good. It's utilitarian but it's nice to look at like a good tool. After all the fancy stuff I keep coming back to it. I like the video mode. I like the low demand it puts on my computer. I like the color selection. At one end we have fabulous lighted sheeny detail like Nucleo Nlog, one of the most downloaded and subtle skins available. At the other end we have the style and simplicity of Studiosus. They are a perfect pair. One an epic poem, the other a haiku. --R - April 27, 2006 by Ramon Mclanez

awesome minimalist skin - This skin is perfect for my use... no big gfx so it is responsive and lightweight, and doesn't take up much desktop space, which is key when you want to play music all day while you write code and have tons of applications open. Lots of color options, and all the functionality is accessible. Only improvement I'd make is to have volume on the main windowshade mode instead of VU, since I can still turn that on indepently if I desire. It's a design decision I understand. At least the windowshade VU can be halted so as to not distract your eyes. Overall great job - it's my new everyday skin! - April 8, 2006 by james hendrix

great skin! - Gotta love them smooth VUs. Now, if You could only add repeat and shuffle controls somewhere inside the skin :) I am giving five stars in advance. Oh, and more color themes! Most of the current ones seem excessively darkish. - March 14, 2006 by Pete Arminas

Perfect! - I love this skin, i have a customized version of this and it looks mean on my broadcast pc, its the *only* skin we use for the schedular and sound cuts list, its sleek, its perfect, and with the customizable colors you cant go wrong, all together 5/5 for the whole thing :) - March 9, 2006 by tuckerm m