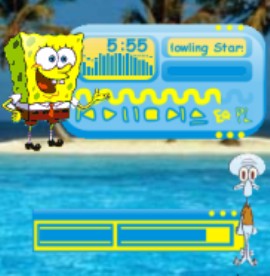 All right, it's spongebob - ... but it doesn't mean it's perfect. Spongebob isn't fully visible, only the part within the blue square. The search bar is funny, but not practical. Buttons are all fine though. Playlist uses good colors, easy to read. All in all, nice, but i wouldn't use it more than a few days. Also, some ppl with color-related sight impairment couldn't see yellow on blue, nor blue on yellow. Peace - March 28, 2008 by Voro Kados

SpongeBob SquarePants - I love spnogebob... i may be 13 and i watch spongebob but i dont care!!! spongebob is the BOMB!!! and i think who ever doesnt like spongebob is CRAZY!!! - August 24, 2006 by Jessica Keathley

SpongeBob - I really like SpongeBob SquarePants - April 1, 2006 by Roope Lehtonen

Sponge Paul Squarepants - my husband loves spongebob, and actually, i was the one that got him into it when i was sick a few years ago! so spongebob still has some pretty good memories for the both of us. - October 6, 2005 by kasey silva