Sweet and to the point.

Sweet and to the point.

Check out the new Sony NW-S705F Walkman built for Winamp. 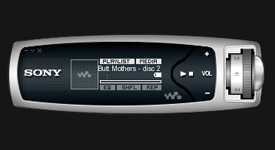 This one is really slick.

It will make you want to grab it from the screen to take with you.

Great one - This skin is totally awesome with it's stylish design.But it didn't indicate the volume level or whether the music is repeat once or all....should improve on that.Overall,it's cool.Love it. - December 17, 2006 by CheeHan Koh

Colors - I totally dig this little device. Nice and to the point! BTW I found the colors... if you click the Sony logo it pops up with another link to the site. - December 8, 2006 by Slick Rick

Great one! - This skin is really awesome. And you can change the color too - just tick the sony logo, to acess the color change function. Only the mini player is not that well designed - could be done better. - December 8, 2006 by Peter Segendorf

Good But Basic - This is a nice, but basic skin and could be improved by adding a choice of colours. I personaly like to change my skin colour to match my PC colour scheme. - December 7, 2006 by Alan Hunt