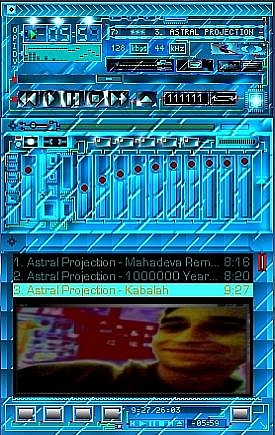 Rating your own skin (more than once) is against the rules and could result in your skin being removed.

i'm back - I'm back after all this time, and i'm still the most recent person to rate this piece of crap! IT STILL SUCKS!!! Now i don't even think it's worth having anymore. I hate this skin and would recommend to everyone NOT TO get it. deyan, you suck too, for making shit ass skins. if u or anyone has anything to say about this e-mail me @ _---> [email protected] - July 21, 2005 by Aero Tech846

Deyan- this skin looks good, but damn! - This skin, at first glance, looks like it has a lot going for it, but damn, once ya get it, the skin really sucks! Other than the graphics the skin has major problems. For starters the buttons don't work. Second, the cursor is really a pain. It doesn't point at what you want. I have to place it above or below an object to hit something. Three, the equalizer mismatches and doesn't make the player work properly if you tamper with it. 4, the player is also slow. Deyan, this skin looks good, but damn, there's nothing going for it. It gets a 1 star only for the nice color and graphics. I'd recommend that you work harder and make the next, if so, one better than this one. Also, who rates there product more than once? Come on. - May 16, 2005 by Aero Tech846

hmm - It is nice grahics, but makes it hard to see, and the cursor is offset when you try to change the eq. - December 2, 2004 by David Meloon

Sky Electronic - I love this - except the cursor is sort of wierd and has to be tested before using - the little smiley face is cute, but it took me a minute to realize that the smiley face is the actual cursor on the play list. Otherwise I really like the looks of this skin. The cursor label on the bottom of the cursor takes a while to function when you are trying to play a CD, etc. Overall I really like the colors and the look of this! Would like to see some more from you. - August 9, 2004 by Eugene Edwards

Not sure - This skin shows imagination but has ended up a bit confusing. I like the selection buttons on the playlist and the general idea of the whole skin but over all, it's just too much to take. 3 stars for imagination. - August 2, 2004 by Dan Dano