Very long work on this skin, I wanted to create a funny skin... detailed and functional.

Very long work on this skin, I wanted to create a funny skin... detailed and functional. 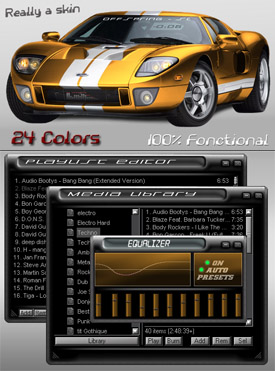 The buttons are not really hard to find, once you get used to it.

Stylish, Sexy, Superb! - One of the best skins I've seen in a long time.To begin with, the concept is just great. I'm sorry if I've missed it but I've never seen a "car" winamp skin. This is the first and it has been executed brilliantly. The best part is that all the color themes look awesome. This is something that does not apply to most of the winamp 5 skins as only the default and/or a couple of other color themes look well.I'll be keeping a lookout for all themes from Ben.Excellent job, highly recommened. -Vishal Trivedi - June 19, 2009 by trivedivishal

The best one i ever had!! - Ths is the best skin for winamp i ever found ... nothing stiks out of the main body, the buttons are all on the main body, the greatest. Hope that in time there will be a Viper GTS skin like this one or another muscle car from the best .... until then keep up the good work ! - June 24, 2008 by Alex Dracul

NOW THATS HOT ! - love the skin but the buttons very easy to find but the would probaly make tha car ugly but i would like to see even more skins from you with more different car models and souch mayby with some of the cars from the fast and the furious or somthing like that - May 31, 2007 by Danni Helsinghoff

Exceptionel - For people who has interest in either cars or just beautiful skins, this is a must. Now I'm just waiting for more like this, maybe with a selection in car manufactures. - November 29, 2006 by Martin Reinholdt

its the best one yet - love the car,im a bit of a ford fan.and everything is placed just right.easy to work with,i love it! - November 5, 2006 by nate mcwilliams

Perfekt idea! - Really nice pice of work! This one but whit an old Chevrolet SideStep PickUp in the background mot be the absolutley ultimate skin in the history! Something to think about to next time =) 10 Stars from Sweden! - October 5, 2006 by Tobbe Greatest

Congratulations - A Great Car and a great idea made up a great skin. thank you - October 1, 2006 by Murat Yurdabayrak

Colors - Im new to this can u tell me how this changes colors - April 27, 2006 by Patricia Bridges

Way Cool - This has got to be one of the best skins out there. To the reviewer who couldn't find the song search slider, its in the center stripe on the hood. The best part about this skin is discovering all the buttons. I totally enjoy it, and need I say how awesome the subject of the skin is. The GT40 is my dream car, if this is as closed as I ever get to one, I guess I won't kill myself in it. Awesome Skin. Excellent Attention To Detail. Great Color Options. If You D/L this skin you won't be disappointed. - April 6, 2006 by Scott Snelling

Nice - Really like it.. if u want to put some effort in knowing the buttons... they are kinda tricky.. espaccially play and stop.. btw kinda big to so scaled it 75% - March 6, 2006 by Mr PotatoNose

something attractive - i think this is the most inventive skin i ever used so far for winamp. and it is such a pleasure to find all the buttons... and of course their positioning is interesting as well. very nice job - March 6, 2006 by laur s

Fast Skin - What a Great skin. A cool car and a great interface. The buttons are easy to learn, Great job!! - March 4, 2006 by Brian Klimes