A skin so simple you'll cry.

A skin so simple you'll cry.


Yes folks, it's another ancient old WA3 skin brought back from the dead.
Do try and remember this isn't serious and this skin is here to show y'all how easy it is to make one of these new fangled modern skin things, so use it to learn basic skin structure and other stuff like that.

And if you whine about it, we'll send Mike around to trample you under hoof, ok? 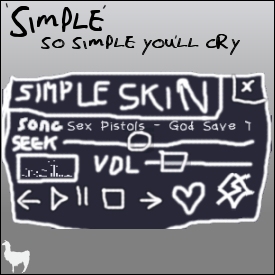 Back to the ol' closet for some more goodies.

This time something for the black and white enthousiast. And you thought it would not look good on a modern skin, eh? Well as simple as it is, it is quite a good skin. Masterfully hand drawn by none other than official Nullsoft staffer Christophe, with additional drawings by our own Mr Jones.

Yay for hand-drawn skins! - I fell in love with this skin at first sight! While browsing for something simplistic and almost 'retro', I stbled across this skin and giggled. My download button was hit immideately. 8) Much love for the person who made this. - July 17, 2006 by Leyla OMG

Better and simply - yeah, a cool skin really great!!, but the button for hiden the media player?? - August 14, 2005 by martin anchiraico

simple but quite funny - simple yet a little insulting, which is the point behind this skin, this is a running gag and it deffinately got me laughing at it. a good skin as it is THAT simple to use, even a technophobe could use this skin. it's that easy. it's appearance look like a 4 year old scribbled it from a paint program but this is a nice piece of work - August 6, 2005 by jonathan per

Simple Skin Rocks - Simple Skin is so hilarious I had to dowload this it barely makes sense with some of the buttons thats why i think its funny. I give it 5 stars big time. lol - February 2, 2005 by Krista Schmitz

Great Stuff Man - Hey this is great!! i love this skin!!! you have to e-mail me on how you made this because im trying to make a simple skin to for my first one. - January 23, 2005 by mikein goofyman

LOL - hell yes! this skin rocks. bound to put a smile on anyone's face who sees it for the first time, and says "what the hell?!" - January 3, 2005 by dizzy chameleon

simple skin - i love this. its so original yet..no one thought of it. hm its cute and fashionable. i love it. - January 2, 2005 by Julie Costanza

This is awesome. - Hahaha, this is great. *glares at fuddy duddy above her that has no sense of humor* Okay, it's not meant to be a work of art asshat...lol, I think it's great. Really cute and just shows that it doesn't take much to make a working skin. Hey, looks aren't everything. ^_^ - September 3, 2004 by Laura Vaughn

Less is more! - Black is beautiful, less is more. What pertinent word this is... Christophe, great work! thanx man! when clicking "color themes" option, it gives a substantial answer to the user! :) The only drawback is that; main player does not include buttons for opening playlist editor and other useful windows, a great skin though... deserves 4 stars... - August 2, 2004 by Gďż˝khan T.

Okay... - okay, well its not the best. But its a great, simple modern skin. and as nullsoft says, its just to show you that its easier to make a skin. Besides, dont expect something good when the file size is less than 100kb. Sheesh Scott, dont you understand, its a JOKE. - July 17, 2004 by b silver87

Wauw - I just love this skin :D Woot me not smart I loikkkke my skin lalala :D me Lama you dada Moi Mandy :D - July 12, 2004 by Mandy Oosterhout

Hm... - Yea, I truly think that this would have gotten a 2 star from the skin rater if it wasnt submitted by "Nullsoft Skinz". I think that lately, crappy skins redone By nullsoft Skinz have been getting too good a rating just because the reviewer knows it was submitted by a staff member. - June 27, 2004 by Scott Kuehnert