its simple..and, ummm...amp! This is my first winamp skin. I wanted something that was easy to use, and at the same time nice to look at. What do you think? 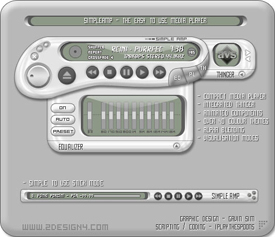 Style has a new name

Very neat compact skin that hides a lot of features. Lot's of colour themes to play with, minimal mode, built in EQ and thinger, very stylish.

Good, but ugly. - It's a very useful skin, but the color themes are rather unattractive, and some even make the menus totally illegible. I like skins that are small and look good. It's a decent skin, and if the author plays with the color a bit, it could very well be great. - September 21, 2003 by Dante _

Very very nice! - Very nice! stylish design, user friendly, and, best of all, looks good on your desktop. There is one little flaw. The main window don't really fuse with player editor, but that can be overlooked! - August 30, 2003 by amelia Bennett

sweet - very nice love it small and easy to use should be a bit better graphic design but all up nice - August 15, 2003 by Mark Zippa

Groovy! - Like the stick mode, but agree w/Planet Abyss, the windows are too bubbly for the stick mode, wish more skins took devay's idea w/skinned windows that collapse... - June 20, 2003 by David May

Nice. - Very nice. Could use many more color themes to choose from... but fits nicely on a desktop and is intuitive for use. Thanks for the skin :) - June 15, 2003 by arikamu ji

Main window & Winshade look good, but not the rest - I've used the beta-version of this skin, about a month back, and I like the design of the main player window, volume control & the cool winshade mode. I also like the EQ & Thinger slide-out drawers; but what really pisses me off is the design of the component windows: the borders are way too thick, too much space allocated for the window-title & they end up occupying much more space than the main player window itself! The full version is not any different from the beta. - April 10, 2003 by Prashanth Srinivasan

work on like this - its a really nice thing you made there. i like those skins that are not too big and got all the features you need by the hand ...very good work i think !!go on!! - April 10, 2003 by Conrad Clau?