my modus operandi is amalgam

my modus operandi is amalgam

A modernized, still-stylish remake of a classic skin I made, inspired by a still-new anime called Samurai Champloo. Coded by Mr. Jones, and designed by me, LuigiHann. 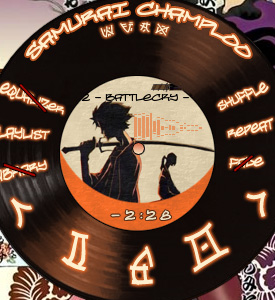 On of the best modern skins I've seen for a long time. Graphics are very good, but the standard frame is simply amazing.

Great Skin - Love the show, and this skin is defiantly worth a look. It's not my favorite, but is very well done. I like the simpleness of it, as well as being able to tell exactly what I am doing. Oh and the playlist looks awesome :P - December 22, 2006 by Nathan Milbrath

Two of my favorite things combined. - Winamp is my favorite player...after many years of trying out many different programs. Samurai Champloo is one of my favorite animes of all time. At first glance this skin may be intimidating, but it is truly one of the sleekest, prettiest, smoothest, modern skins that I have ever used for Winamp. The details such as the sword being used for the volume, as well as the symbols actually being slashed when you click them is what make this skin one of the best available on this site. Priceless, even though its free lol - November 27, 2006 by J3551C4 C

IS GOOD - VERYFINE IS SAMURAI CHAMPLOO - January 13, 2006 by EMERSSON VALENCIA

Enjoyable - Great skin. I love the way how you put the eq in the middle. The buttons are hard to read, but the scrollovertags (or whatever you call it) do their job. All windows are nicely skinned. The only downside on this skin, is maybe the fact that you can't change colors. But then again, the colors are perfect as they are. Great job and a big thanks! - November 5, 2005 by Simon Says

Spin it. - This skin is very good and matches the style of the anime. I just wiah the vinyl had a but of animation that rotated while a song was playing. It took me a few moments to figure out what icons did what, but all in all, it's good. I just wouldn't use it everyday. I'm giving it a 4 out of 5. Oh, Luvic...Nabeshin is the nickname of Watanabe Shinichi from J.C.Staff (Excel Saga and Puni Puni Poemi) and not usually assoicated with Watanabe Shinichiro from Sunrise (Cowboy Bebop). - September 25, 2005 by DemonOuterverse Outerverse

Very Sweet - Funny that pic you used in the background just happens to be my desktop. lol. Very unique style and really nice set up. I applaud you. - September 14, 2005 by Amber Michelle

Simply Great! - This has to be one of the best round skins I have ever seen. - September 5, 2005 by Robert Norton

WoW - I love it, the sword is great thing and only problem I had was to understand symbol, but that take less then five seconds. Great work i love it!!!! - August 29, 2005 by Ines Delic

I luv it but... - This thing simply rules, except for the small prob that there's no seeking bar :/. Except for that, one of the best modern skins out there, just like the series :). - August 24, 2005 by VenQWish ~nyo

Great - This thing is great but you should put a seeking bar around the edge of the disc and animate it so the disc spins. But other than no seeking bar on this thing it's awesome. - August 22, 2005 by Ari Manakos