Third version of my skin Rumbling Amp. Thanks for the good acceptance of my work. Contains little fixes for Ayu Daikuuzi and for the Themes container.
If you only downloaded first version, this one has beautiful screenshots from the TV series. Get it now! 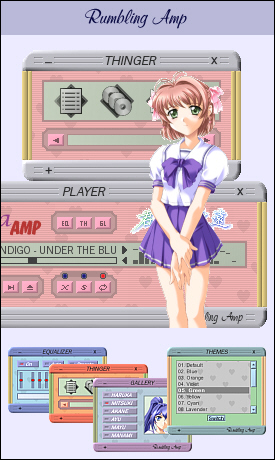 More windows than any other Winamp 5 skin.

You thought of everything, and even brought a "browser" back to life. :)

Stunning! - I have been waiting for a good amp with some of my favorite anime characters... and i found a couple, but never great ones with Rumbling Hearts (Kimi Ga Nozomu Eien), and once I found this I was sooo happy!Great job!!! ^_^- - April 3, 2008 by Kikio Leeada

Eccentric, but so beautiful... - I've never played this game, neither downoaded this skin (in fact, my sister did, but she doesn't have an account to submit comments). Anyways, once I saw this beautiful skins (and its colors and chicks), I got perplexed, so this one deserves 5 stars. ***** *0* Beautiful!!! *0* - July 24, 2005 by Janus Rakeldant

My god! - This is the best skin i have ever downloaded! I love it so much! I like the idea that you can change the character. The change of color box is awesome too! You really need to make more like this! GOOD JOB!!!! - June 5, 2005 by anna mcgill

nice! - KAWAIIiiiiiiiiiiiiiiiiiiiiiii i just loved it but u cold make it a lil light...almost 3mb a skin is kinda too heavy =p anyways, good job cya DDL - June 3, 2005 by DarkDragon Lord

Too damn good. - This is so good! Very creative! Having 6 different skins in many colors all added in only one skin was very intelligent. Good work, and well done. This skin is too damn good! - May 15, 2005 by Aero Tech846

Watch and Listen - I wish people would learn how to make skins like this. Very few take the time to make themes and all that other stuff makes skins nice. Plus, all the buttons are visible. That's always a plus. - December 1, 2004 by David Meloon

Rumbling Amp - NO ERRORS! NOVery good, comfortable skin, with mini viewer about anime. May be very little. ANY WAY, i'd like this skin. - September 29, 2004 by Aramis Esteva

Great - what a great skin, I just so the anime and thought it rocket keep up the good work - July 15, 2004 by Jason Watts

Clever - I usually don't like "modern skins"--they're kinda slow and hard to use. However, this one has very clean layout that won't hurt usage. - June 13, 2004 by Guani Lee

Wow. - I just love this skin. It is so unique and well thought through. And everything's skinned too, along with the fact that you can change the girl and such! Thank you so much for such a great skin. - June 7, 2004 by Anna Klitzing

Amazing!!! - I never tought someone could create such a magnificent skin!! Honestly, I bow to your skills as a Skin Maker... Keep it up, I wanna see lots n' lots more!!! This Skin is just perfect!! - May 27, 2004 by Sergio Matuda

Yaaaay finally a KGNE skin, TY - Yay!, Great work on the skin and gallery mode, reccomended it to friends Keep up good work (Make a Mitsuki Hayase or Rakusu/Lacus Klein one plz-plz ^-^) - May 14, 2004 by Saori Yukikaze

Yuck! - This is the gayest thing i've ever seen (inc. David Beckham). The pink makes you wanna kill a rape innocent people. - May 14, 2004 by Peter Manning

OPTIONS PLUS!! - What i love about this skin is its options with the user face verry COOL. and the funny little japanese - May 6, 2004 by achmed mandula

Very Good Skin! - I really love this skin!! After I've seen the Anime I totally fall in love with it! I only miss the the Character Daikuuji Ayu. But the rest is done very good. Andre - May 2, 2004 by Andre Engelmann

Amazing! - Wow! A really amazing original skin. I look forward to seeing what you make next ^_^ - April 25, 2004 by Cassie Nicholls