Tons of rusted metal with a twist of Futuristic displays

Tons of rusted metal with a twist of Futuristic displays

My Third skin published! This is not one of my best skins (sometimes i think its awful) but i like it mostly because its simple. Again i used a rusted texture because rust is never enough for me, i just love this texture. This looks like a futuristic device heavily used, i included tiny green screens to make it look cool. 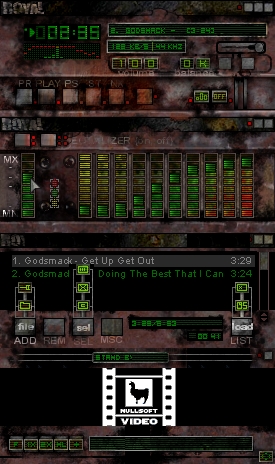 Oh, I like this even more than the other one, more lovely rust but the displays really set it off, excellent work.

awesome - I really love this skin. It's actually one of my favorites. The only thing I dislike about it is that it's missing a dragable slider on the seeking bar. Other than that, great job! Rust rules. - July 14, 2008 by stormsiren 609

Really Rusted - This skin is designed to be rusty, but JuaNN Vendramin has gone to far. This skin should rust away - February 28, 2006 by Tom Jones

One of the best - This skin is so unique and the whole rusty looking is so GREAT. - February 25, 2006 by Rory White

I like it - I find the way it looks worn out and old looks really awsome - February 2, 2006 by Tyler McLean

Just plain awful - Why on earth does this have over 86,000 downloads? This is horrendous. You can barely even distinguish where the buttons and labels are on interface. The coloring just seems splotchy and random. - January 26, 2006 by Aaron Boswell

Congrats! - Congrats on the highlight! As I told you before, I like this one, specially the equalizer. - January 12, 2006 by Veronica Mogni

It is cool - It is one more which excellent work has pleased me ROYAL RSTD 2 ROYAL RSTD I think that you should to try do modern skins. They are more popular. You are really talented But I cannot understand why you skins do not become popular - November 18, 2005 by Bahmet John