Remnant is another of my Metallic Alien-Organic based skins with a sleek clean interface. 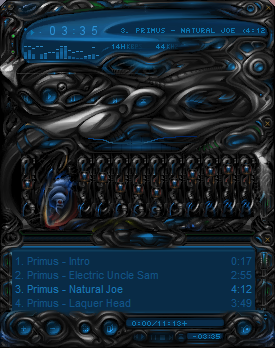 This skin is totally insane!

I'd like to apologize for what you're going to read: is this skin organic or orgasmic? Totally insane, I just can saw "wow!". You know I love full detailed skins. And blue, what else can I ask for? Thanks for your submission.

Very nice design. Love the blue and the alien organicness. Buttons could be bigger. - December 9, 2010 by Richard Longjohnson

it looks too dull in color and the size of finding button is too difficult.but it looks cool as an image but not as a theme...IT SUCKS - November 28, 2010 by [email protected]

This skin is just amazingly awesome, it is very well put together and thought out. The sheer beauty of this skin makes me want to cry.I can only hope to produce something this eye catchingly sophisticated!-Mike Bergstrom - June 5, 2010 by mike db