A very complete, well thought-out skin, with everything skinned in Rectangular's slim and functional style.

All of this while maintaining fast loading time, low CPU usage and small size. 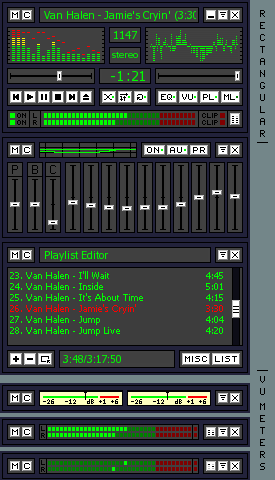 Another minimalistic modern skin. Some stuff can be hard to see depending on which color theme you use, but everything is there and waiting.

Matches my windows! - Nice and simple skin, but there's two things that bug me:1: The playlist cannot be resized in winshade mode2: It would be nice if you could toolbar the skin, the way you can do it in the default WA5 skin. - January 17, 2008 by Japa Illo

Wow - This skin is awesome. It's retro, it's cool, it's easy to use, and it has a lot of useful functions (for example, I use the avs a lot and I really like all the buttons the avs window includes with this skin). Great job! - March 31, 2006 by Marta [encore]

Perfect simple skin with lots of VU - Just what I have been looking for. Lot's of VU features that can run simultaneously and a plain design with clear fonts :). Great job! - March 29, 2006 by Divo Blaze

Perfect! - Michgelsen, this is tucker from winamp forums, you've done it again! i love this one more than your other one [audio rack]! this is so perfect Michgelsen!! 5 stars on everything!! no complaints once so ever!! i - October 9, 2005 by tuckerm m

Smart and Friendly - Minimalistic, compact, clear, with a few nice tricks. Although it looks rather crude, especially the button design, the skin somehow manages to have a nice feel to it, making it's use a pleasing experience. The color schemes just suck for the most part, fortunately there are a few that look pretty slick. The default color scheme does this skin unjustice, so try a few before deciding you don't like it. I'd like to see some more skins made by Thomas, as it's clear that he got what it takes for a great skin designer. Just a bit more visual juice wouldn't hurt, though. - September 16, 2005 by Sam T

Negative - would* be good, but has major bugs. leaves remanants behind a killed window, partial display of activated windows...needs werk. - December 14, 2004 by Ben Edwards

Rectangular Spectangular! - Aha, level meters on Winamp, now there's a thing..... Graphic equaliser has an 'auto processing' function, not sure if this acts as a multi band limiter? - November 23, 2004 by Bear Freeman

Perfect - Just perfect skin, and the only one I now am agree to use Winamp with. It has full functionality and almost nothing in excess and designed perfectly, that was exactly what I wanted a perfect skin to be. In the past I was willing to write about some playlist flaws like poorly visible current playing song and impossibility to call ID3 window. Also it was definitely taking a bit too many resources. But recently I donloaded the skin again and it seems to has been updated and that flaws were apparently fixed as if I told what I wanted (I didn't actually). So that, I want to thank the author, I can even say he made my dream come true! - November 13, 2004 by Sergei Rubliov

GOTTA love it - Wonderful skin. Looks nice and basic, and isn't fugly like some of the other simple skins. Great color selection. Can't decide between the spectrum analyzer and the oscilloscope? Rectangular has them both. VU meters skinned to perfection, and working to perfection. Also has the old classy look, the only reason why this skin isn't a classic one is because of the VU meters. It is not a hassle to deal with, and fits neatly wherever you choose to put it. Ok kids, this is THE reason that WinAmp DOMINATES Windows Media Player! All the features you love, and then some. - September 29, 2004 by the bonehead

Simple - Some may say this is ugly. I say this is perfect. Skins get dull fast and this is dull to begin with, but it doesn't bog down my computer. Rectangular is just my style. - August 26, 2004 by Klax V