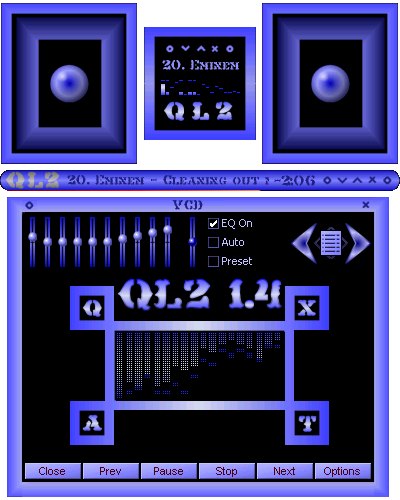 I like this very much, and that's why you got yourself a 5 star skin. :)

This skin is hideous - what is wrong with you people? I guess there's no accounting for taste, but this skin is downright UGLY. I don't understand why this is one of the top rated. - February 13, 2007 by bacon mcgee

The only thing that...... - would make this skin better is popup descriptions when you move the cursor over the symbols. It still gets five stars from me though because once I figured out all of the functions I was hooked on it. - July 13, 2006 by Jack Sanders

Cool - I thought this skin was awsome , but could you do somthing in a magenta pink. It would look so good with the black! Thanks! - March 4, 2006 by Nessa Cooke

Not bad at all - Simple and effective. Very good shade mode. Very good help. Design could be improved, though. All together - well earned 4 stars. - January 28, 2004 by Djordje Trifunovic

Not bad - Not a bad skin at all but reminds me of a 1970's sprayed stereo owned by my dad, try and bring it more modern mate you may be onto something then - October 21, 2003 by Andrew Whalley

cool - cool skin, love how the skin is animated but it does take a little learning - October 7, 2003 by cobalt dragon

This is my favorite - I just love this skin. The color blue is my favorite. I like how easy it is to get to know it. I have it on my Winamp right now. Thanks for the fun - October 6, 2003 by Ronda Keasler-Ford

now we gonna partay like in 1991! - OW! the crazy bright neon colors are hurting my eyes! I thought people stopped using these colors on computers after they broke out of the 16-color world back in 91. Also theres too many squares. My computer is already a square, and my desktop is in the shape of a square, and then I open winamp, and then there's about five billion squares in my face! its a little too much for me, sorry. I give it 2 stars because it works. - July 31, 2003 by rach jo

Hmmmmmm - I do not like the animations on the advanced EQ or whatever it is called. I do like the help file though. And I do like the blue coloring (who said purple?) it is a bit bright, but it isn't too bright, it doesn't hurt my eyes. The skin takes up a lot of space with the extra things you've added to jazz it up, but for someone who doesn't mind & wants their desktop to have something that matches their wallpaper so their geek friends can "Ooooh" and "Ahhh" over it, this is nice. - May 30, 2003 by Miss Deceptions

Well Done - At first i didnt think it was anything special, but i have grown to like it alot! - February 24, 2003 by Harry Singh