This is the "official" Probe for Winamp 5.

This is the "official" Probe for Winamp 5.

Probe has been one of the first real big non-nullsoft skin to hit the streets. In the early days, Probe helped to make adjustments to Wasabi. I was considering it more like a technology demo than a skin. 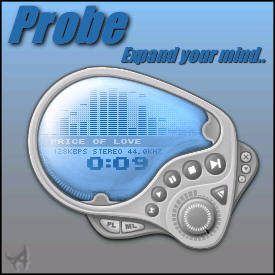 After a long wait, it's here.

Probe, much talked about when Winamp3 was in the alpha stage. One of the more promising skins that was never completed. Well, it is completed now. Get it here now. Play with it, probe it and see the wonders of wasabi at work.

Less Glare - This is a nice clean skin, but the glare is over done. It would be better if the background was easier to see and if the glare on the left side was a lot less. Hopefully someone fixes that and adds more color schemes to it as well. - January 30, 2006 by Brian Bruemmer

Not all that great.. - Sure, it looks rather good at first glance, and falls into my 'lots of round alien-ish thingies pointing out'-category, but this one actually fills those things with buttons and functionality, exept for in the small mode, where almost a third of the whole player is good for nothing.. Other than looking good, ofcourse.. I like the drawers in the main player, but the playlist and library windows looks like they belong to another skin, not a very good job there. And also minus for not having a stick mode, although it is somewhat sufficient with the small one.. I was going to give it 3, but changed my mind, it looks so nice.. - July 11, 2004 by John Smith

Kewl! - This little piece of colourfied funk is freakin awesome! Peter says: Download it now! - May 15, 2004 by Peter Manning

My oh my - Such a nice little thing this one be, yes indeed. I'm glad to see the resurrection of some of those ol' Winamp3 skins that sort of died out during the development process. It seems far "spriffier" than a vast majority of the modern skins around here. Hey, let's play with some more transparency effects, skinners. What do ya say? - April 29, 2004 by Shawn The_Great_and_Magnificent

An instance where probing is a good thing. - I wasn't around for the hype surrounding this skin when Winamp3 was in development, but it is obvious that the hype was merited. This is definitely one of my favorites. Extremely functionaly fairly small, it demonstrates the versatility of modern skins in a nice looking package. Would appreciate more color themes and either a playlist winshade or scrolling title in the main window winshade, but this skin is very solid without those. Get probed! Its an experience you can't live without! - April 24, 2004 by toejam 07

I've been waiting for this for YEARS! - I remember the first time I downloaded it. I was a noob, so I didn't know it wouldn't work. Just imagine how crushed I was... Flash forward to now. You guys have just made my life a whole lot better! ;-) - April 21, 2004 by Jerri Blank