Olimpiadas. Built for the 2004 GuiOlympics in the Most Usable and Best Themed categories. Olimpiadas placed 4th in the Most Usable, which I thought was a really good effort from me. All essencial elements are on the main player, with the bare essencials on the stick mode 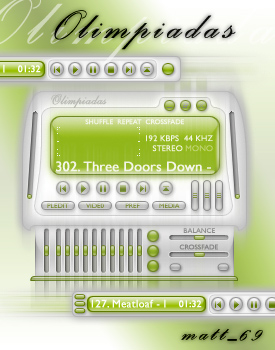 A nice second tier skin. Some elements can be tough to see depending on the color theme.

just the thing! - nice colour scheme, small and compact, nothing to add and nothing to take away ;) + i like that when a new songs starts this small screen in the corner appears!!! :) just beautiful and wonderful! - March 12, 2006 by eikalipts :)

Nice - I love the blend of colors.. Look smooth but I don't like the fonts though, if you can have the same fonts that you have on the top left of the skin, than I think it would look better.. But hey.. It's your skin.. It still look nice though. Tanx.. - April 14, 2005 by Azdhy X

Exellent! - My opinion is that this is THE best skin i have ever seen! I'll be using this for rest of my uneventful life :D - March 21, 2005 by Joey J

Ilimpiadas - For some reason it downloads as a different skin. dark black blue color. not this green one at all. to bad cause i really like the green one lol - February 24, 2005 by kathy bayley

Amazing! - This is probably the niftiest skin I've ever downloaded for Winamp. It's incredibly versatile, the lines are smooth and clear and the color choices are practically limitless! I especially like the pop-up of each song as it begins. Very unusual! - July 22, 2004 by Irene Wolfson

Nice except for one thing...resizeability. - I like the stick mode on this one. The font is readable and the buttons are well designed. The only thing is that it's rather small, and you can't drag to resize it. Other than that, not a bad job. - July 22, 2004 by deus diabolus

Manual select - I am not sure if this is because of my player or anything else, but I can't manually select this skin. If I try to do that it will select the next skin and on my list so far that is the Palillo. Ain't that weird? - July 7, 2004 by Vivian Tong