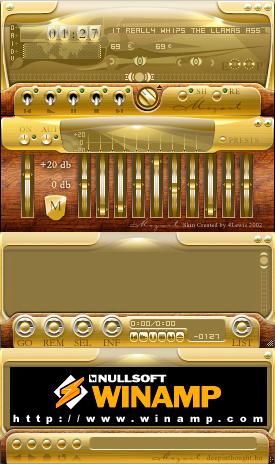 This is a genuine 5 star skin, just play with the balance and volume sliders and look at the animations, see the toggles and knobs turn. A must download for the deihard Winamp fan.

Beautiful! - Intricate style, not a bad concept, some fine details. Sure it would've been nice if the media library was skinned, but if wishes were horses, we wouldn't have anywhere left to live. Thanks for the visual pleasure. Peace! - March 26, 2006 by Henry Kalvin

Really cool skin!!! - I think it's one of the best "classic" Winamp skins in the World!!! Respect to designers! If it were possible, I could rate it at least 13 stars :). - September 9, 2005 by Dimitrius Pinakov

Very nice one - Nice one, the only problem i see is the current playing time font is little bit unclear - July 19, 2005 by Solution Vega

Ho Hum - Sure it's a pretty skin but completely uninspired. Nothing amazing about it in my opinion. - April 29, 2005 by Jackson Sorrentino