A Freeform to one awesome anime series!

A Freeform to one awesome anime series!

Here's a pretty cool skin in tribute to the anime Bleach! It took me quite awhile and it's very apparent that I have much, nay, TONS to learn about skinning, but it's still pretty cool! 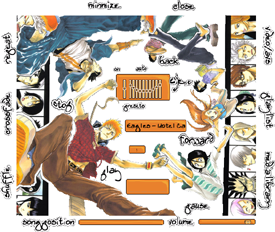 For fans of the series

Are you a fan of Bleach? Do you like big honking skins? Then this one is for you! It doesn't provide a smaller mode, so make room for it on your desktop first.

Unique - huge but really cool and different. love how theyre falling. gonna use this when winamps the only thing im running! neat! - August 8, 2008 by azurien Skywalker

Nice - Im currently using this skin its awesome, I think someone should make a skin, on one side has ichigo in his death god outfit and one side has him in his normal outfit =] that would be awesome! Nice though. - January 16, 2006 by Aaron Tran

errm? - I gotta give you props for the designs, but really it's unorganized. It looks good on a white background but it's transparent actually and i couldn't find a menu? - December 27, 2005 by heiy khlaaf

Yeah looks cool but... - The buttons are to damn hard to see... Yeah you have a white background in the pic and that makes it easy but my desktop has over 20 anime characters on it and over 300 colors -_- if the whole thing had a background instead of an empty view of the back it would be much better, can't arrgue with the fact that it looks really good yet such a big main window is also uncomfortable... If this was your first try on a skin it's made... ok I'm just pointing out a few things that most people might find hard to deal with... - November 4, 2005 by Vikeif Tidus

Impressive! - Well, this is the first Bleach skin and yet, ish so good! Nice Job on the skin! - October 19, 2005 by Hatake Kakashi

It's Honking! - Honking COOL! I figure if you're gonna download a skin of one of your favourite animes, might as well make it worth while and, well, big! It's a great skin with an interesting design, well worth the download - September 1, 2005 by Lee Trudgeon