A handwrited skin with some cool options...

A handwrited skin with some cool options...

This is my first freeform skin, i know that design is little ugly but i spent more time on coding then on gfx. Hope you like it... 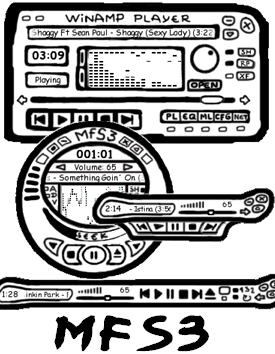 awesome! - Yo this is a BAD-ASS skin. Everything is easy to see and it's easy to use. Cool options like opacity, square and round modes and a built in web browser (what!?). Worth checking out. Thanks Aleks. - March 29, 2006 by m m

awesome - It took me a while to figure out the round/stick/normal modes, but once I did, it became my favorite skin to use. I love the random stuff, like opacity and the clock. - February 20, 2006 by Linka Keyser

Let's change the font - I really love this skin. The design looks somehow childish but it's absolutely great. Lots of functionality, including a very good notifier. Love this but one, but please put in some functionality for changing the font. I can't go along with Comic Sans MS. This skin is so cool and deserves another font :-) - January 17, 2006 by Bernd Mueller

Very Awsome! Most Excellent - This has to be one of the best skins out there! Great work. One thing tho is the fading where you change the options is sort of slow and annoying, and its hard to know how to change to the different modes, i found the round one but i cant find the long thin ones. Oh well more looking. Great job this ones a keeper! - August 9, 2005 by jonathan haha

perfecto - like the best skin ive ever run across - March 7, 2005 by Connor McCloskey

holy god - man this is like the thing, overall this is one of the gratest skins ive ever saw, incredible, sow this is just worthet a five star rating, yeh - January 25, 2005 by fedde van_den_brink

One of a kind.. - Something uniquely individualistic about this one.. I don't normally write reviews.. but this skin made me write one.. sure hope the author of this skin gets an e-mail every time someone posts a review.. because all I want to tell him is that it's a great effort.. kudos.. !!! hope to see more good stuff from the author.. - December 5, 2004 by Pankaj Mullick

Nice Naive GFX... - I like the naive style of the gfx. No cluttered-up display with metallic or glassy-glossy looks. Simple and personal. One down though: The video playback window frame is too thick.. It sometimes make the video window go outside my screen borders. Anyways.. :-) - October 12, 2004 by Goran Hansen