Updated the skin with some small changes to the main player. Skinned the standard frames. Please extract the skin to it's own directory for best result. There seems to be a problem when loaded in .wal format. 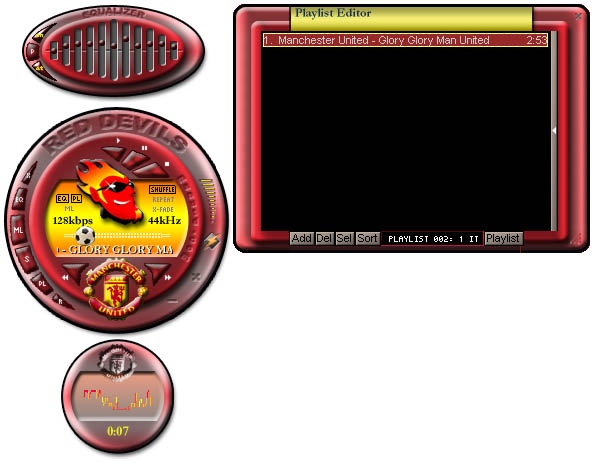 British football skin. Why is the equalizer shaped like an American football?

man.united - if have manchester united football player is better - July 19, 2008 by teoh JOUGH

Shut Your Mouths! - Manchester United Rules. And I love this skin. There needs to be more Manchester skins... I'm canadian...And love Football. SO yes some people do care for them outside England! GLORY GLORY Man United ! P.s - Newcastle sucks... just like LiverPool. - April 22, 2003 by Jaimie-lyn Eccentric

for christ sake - Don't people realise that outside of London, nobody cares about Man United, WHY WHY WHY are we subjected to this! - March 13, 2003 by Andrew Whitelocks

Footy skins - Man U skin is fine, except for the devil face. But, I'm really interested in obtaining a Newcastle Utd. skin, as i'm a fan of NUFC not Man Utd. - February 19, 2003 by nick clark

Awesome Job - This is a great skin. I dont even like manchester but the skin looks awesome. I hope the others you make are just as good. - December 2, 2002 by Mike Schwab

manutd - the skin was rubbish it downloaded but went all naffed up - September 27, 2002 by Chester Dick

Wrong - So very very wrong. Jaggy edges everywhere. Half a mile of shadow taking up space for no apparent reason. All the buttons you use most are hidden the most. - September 11, 2002 by John Munro

Look's Gooood!! - Well i havnt downloaded it basically cause i couldnt be bothered but it look pretty dam catchy!!! - September 1, 2002 by damien azzopardi

It's good... but... - It needs a fair bit of improvement. The graphics could be better and the buttons could be a bit bigger but apart from that it rocks... long live Man United!!!!! - September 1, 2002 by Barrie North