you can view my other designs at www.boosterdesigns.com 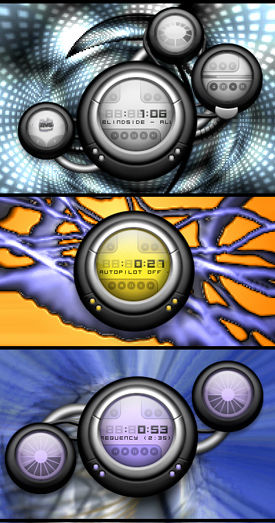 nice curves - my favourite skin. small, curvy, simple controls, nice in the corner of my screen at 30% opacity. - January 10, 2008 by andrew lorien

Almost perfect - I like the visualization operation and the whole skin in general. Two things though: 1 - You have a glitch with the minimize window buttons, they all minimize the entire player. 2 - There is no dark green or black black color scheme. - February 20, 2007 by Lavacano Volblaster

Nice skin, but... - This is a cool skin, but you lose major points for not including a PLAY button in any of the windows. - January 14, 2007 by Aaron Boswell

nice concept but... - the skin is definitely looked cute and small with variety of colours... but if the buttons are meant to be used then it could have been bigger so it should ease the way the user clicks. also, there isnt a "play" button? - January 13, 2007 by Evarts Liau

good job - really nice skin. 2 things I would fix: - the background numbers (where time is displayed) are too dark.. it decreases readability. - the highlights are too bright for my taste.. nothing big though. cheers! - January 9, 2007 by j m