the new and somewhat improved link from the upcoming zelda game for the cube. 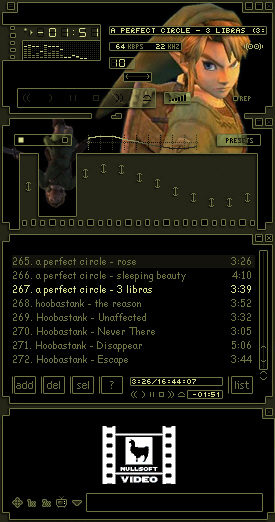 A linko to the future, then?

Im not a big fan of fan skins (...ya, thats rigt), but this one is very well done and relatively fun to use

sooooooo cool and cute!!! :) - its organized and even a nubee would know which control to click. cute backgroung and readable playlist... ;p - February 27, 2007 by djycah sarroza

like it but... - Well, this is pretty and I like it (and I rarely like dark skins) but I think it wouldn't have hurt to show the play/stop/etc buttons since they\'re not even on the pic... it's just annoying that they're not visible when not used (That's just my opinion, I suppose that somebody else could say that it's original *shrug*) ..anyway. what do I know, this is still very well done =) - February 3, 2006 by Evelyne Pilon

cool - Finally! Someone got less than lazy and skinned the cursors! You get the fifth star just for that! - January 2, 2006 by Cassandra Edgerton

Easy to Use - This is by far the easiest Zelda skin to use! I like how everything is in reach, and I don't have to search for anything. Thanks for making it right! - December 24, 2005 by grad iate

Need More Substance - This is one of the types of skins I hate. You think you can slap on a familiar face and call it good? A good skin requires more work. Take away Link and you are left with a pretty empty and unimaginative looking skin. - June 26, 2005 by Arch Angel

Cant wait for more Link! - GREAT Job on this, Kristen, I hope you come out with more awesome skins. (games Hopefully ;P) - May 21, 2005 by Trevor Haaby

Return of a Hero - Nice green look (and feel). Shows a slightly darker side of Link. Only complaint is that the cursor can be a bit hard to see. - January 16, 2005 by Lance Earl

Zelda skin - This is the best skin I've ever seen as far as my taste in winamp skins go. Zelda is my most favourite game and unlike the other skins I've seen related to the game, this one is actually really cool. Looks realistic and mature. Great work, Kristen! - August 29, 2004 by Karma Koma

Link ^_^ - Gotta love the new link character that nintendo has finally given us. The anime/realistic style looks great on him. And this player definately compliments him. Green was always his colour! - July 13, 2004 by candis bross

Wow - this IS some beautiful and awsome skin, and i love link too . jajaja anyway this is a great job , the colors , everything's cool congrats ! - July 2, 2004 by Jen SS

NIfty - I love and I mean LOVE Link! This is awsome! Kudos to you for making it though I never could understand how to instal these things I save them to my comp and I dunno. They never work! Oh well. MAKE MORE! - July 2, 2004 by Alayna Madden

I simply love it - I downloaded this skin to check it out as a Zelda fan and it was simply lovely. I mean, just look at the picture of link! This skin is RIP!!!!! - June 23, 2004 by Franz Alex Gaisie-Essilfie

Awesome - This skin is very good. Especially since it's a fan skin. A few things could be brightened up here and there (open button!!), and the font you chose for the playlist is, well, it's Comic Sans MS x_x. Really great skin. - June 16, 2004 by Aquatakat the Kat

Wow - Gorgeous piece of work. All the little details and the design, simply stunning. Huzzah! - June 16, 2004 by Aimee Jude