The smooth blue skin - brought to you by Jamie McDonald.
Every feature of Winamp3 has been skinned. This is my first ever skin. Lapis Lazuli is a smooth blue gemstone just like my skin. :) 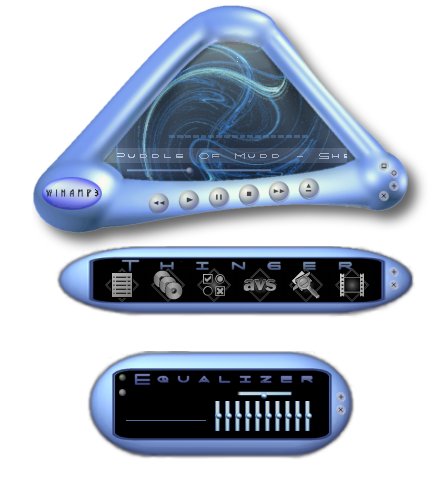 different shape for a different user.

Nice - Very nicely done. Maybe the next version could have the center graphic actually swirling? - December 13, 2006 by Erin Gallagher

interesting - It's a really neat design, and I like the color scheme (lucky for me, since you can't change it). There's no windowshade, but I like it anyways. - September 21, 2003 by Dante _

I wish..... - I wish you would have changed the menu so it was also blue in color, or at least matched. Not the same old gray and black. The media info editor wasn't the same color either, different color than the basic skin, but didn't match your skin either. Same goes for all the windows, I'm seeing a theme lol. You should have just toned down the main color of the WinAmp window that shows the play & all that jazz. Then it would have blended together and been really nice. But you didn't. - May 30, 2003 by Miss Deceptions

design almost nice - is it just me or does every winamp skin with curves on it look incredibly crap (curves should be SMOOTH). :( - May 1, 2003 by vesp *

Ugly WA3 button - Sorry, I know the guy personally and saying that really annoys him :) Nice work tho (he says grudgingly ;) - March 28, 2003 by Douglas Gresham

purdy - this skin has a very attractive skin, but if you like to have your playlist up, look elsewhere. also the odd angles look awkward on the desktop - February 14, 2003 by natlie yarborough

Good - the design is good, but there are things that can be better. - February 13, 2003 by Yanizu Osborn

Cool.. - Cool gfx! but not useful.. you should make buttons in shade mode a little bigger. - February 9, 2003 by Stefano Bagnatica