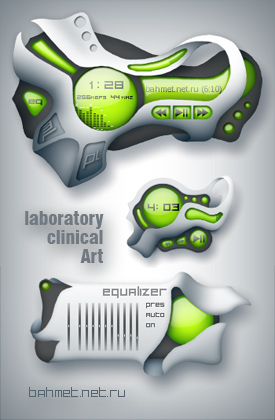 Looks like it fell of some alien wreck, nice...

Coool Bio-Tech Like Thing - Really good skin. convenient and beautiful. Amazing design. Unlike many others. Thankzz=) - December 29, 2008 by Ivan Smirnov

works - Skin works, but I thought more work could have gone into the edges of the skin; they look unfinished...there are too many other 3D-looking skins out there that look better.Functionally, it works great though...good job. - December 1, 2008 by Michael Ludwig

Interesting - Very nice-looking and easy to operate. Ideal for long-time everyday usage, with lots of color sets to choose from for mood changes. No merchandise, no money-orientation, no fan art, nothing specific. Nobody's going to regret downloading it.A bit slow though on machines with weak RAM capacity. But that may not be the skin's fault, couldn't decide.Peace - March 27, 2008 by Voro Kados

awesome design! - The design is a first. Ergonomic and futuristic. Not very friendly though for old timers. - March 20, 2008 by William Tan

simple and simply awesome!!! - It is the only skin anyone needs to download. it includes many cool color choices and has the best design. Only con is that homepage from witch you can find more nice skins is something you can`t understand( because it`s mtfkn russian ). but I`m reviewing the skin so it will not effect the final score. - March 18, 2008 by Joni Auvinen