If you're thinking of going native.....

If you're thinking of going native.....

..just make sure you take your Winamp. Made from sticks, rope and a little jungle magic, Kurtz is fully skinned with lots of neat animated sliders and buttons. Includes custom cursors and MikroAMP skin. Now updated for Winamp 2.9!! Get it while you can... 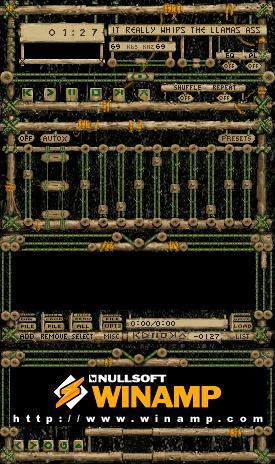 Kurtz?, must be Apocalypse now huh? ;) Unique design going on here, love the little animations and so on dotted around the skin, grab it now while it's hotNow WA2.9 Friendly

heart of darkness theme... - this is nice. i usually use cleaner smoothe skins on my desktop, but in its genre it's a nice skin. i think the skulls on sticks would be nice in the EQ and maybe a tribal mask like Kurtz' woman could've worn in the empty place on the EQ where the rope ladder is now. the vines get a little repetitive. good job. peace. - September 21, 2003 by brad dittmer

Spiffikins! - I love this skin! It's very creative, visually pleasing, and the uniformity of the theme is carried out quite well. My favorite part, I'd have to say, is how the buttons work. Darn cool! They're little tabs, or they just get pushed back. Very neat! I also like how you pulled off the jungle theme. =D - December 4, 2002 by Becka Vallez

Kurtz... - Man, with that blatant reference to Kurtz from "Heart of Darkness", you need some native skulls on a fence in here somewhere... maybe the equilizer....... - September 22, 2002 by Sahara Lashana

Excellent - THIS IS Great Skin.I say thank you to Richard Pettifer - June 5, 2002 by Elena Gomeniouk

Glorious - Absolutely beautiful. Five stars, if only for the nod to Conrad. - May 10, 2002 by Rheyn Williams

Where is Tarzan and Jane - This skin is FANTASIC! Well deserving of 5 stars. Originality 4 stars? Is this guy on crack? The sliders and rope movements , the springy boards, and the spinning on/off switches . Did you lay out twigs and string them together or something? This skin is going on my permanent skin list (for when I have a black background). You got some talent - April 26, 2002 by Chris Carey

Good Job - First off it's Small Sized! And it looks great and actually a bit realistic, that's rare. AND it's not stolen it's all CUSTOM made! Nice work! Keep it up! - April 24, 2002 by Daniel Meijer B

Unique - Very nice. You've got a real 'tribal' theme going on for this. Pleasing to the eye and a refreshing alternative. - April 15, 2002 by Sycia S.

Nice - Very nice skin. Killer volume and equalizer sliders. You can tell there is a lot of thought behind it. - April 5, 2002 by John Sullivan