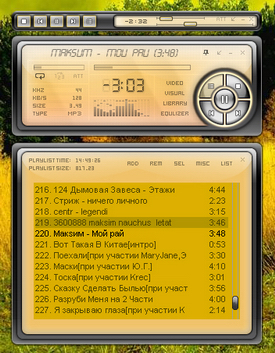 Nice or odd, can't make up my mind yet.Real neat overlapping feature though.

Attractive Skin - Only spoiling point is that you are missing an "a" from "Equlizer". (Equalizer) - January 27, 2009 by Mark Cruickshank

Slick Look For The Summertime - It is easy to use and has a summertime feel, while not having a "look at me" appearance that grows very tired after a short time. - August 2, 2008 by Richard Coreno

Like a starship's dashboard - I registered here just so I could say how much I love this skin. It's exactly what I've been looking for: pretty yet visually low-slung, and it has nice, big, easily visible buttons whether it's windowshaded or not. Nice color choices too, though I like the default very well. This is what good design is all about -- it's incredibly pretty and incredibly useful. It's like what the dashboard of the starship Heart of Gold should be. - July 15, 2008 by Rose McBride

Niiicceeee - Nice skin, but it could use some more color themes.Something darker, high contrast. - June 27, 2008 by Adrian Raica