It's supposed to look like its written in pencil. And look, even the teacher's marked it. She gave it an 'F+'. I hope you can give it a little better... 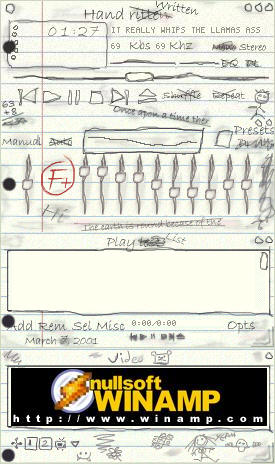 The Hand-Written Winamp skin is a fine example of good design over flashy graphics. It essentially resembles a page torn from a school exercise book but all the standard Winamp functions are in there.

very very very very nice and clever - ofcourse this is a very nice skin, i was looking for something else but how can you ignore something like this???congratulations!could we have opacity on this as well? please?also, on my comp can not expand it fully, i have the left side on the edge of the screen but the right side will eiter be a tad smaller or bigger. - July 25, 2009 by stavros

it let me feel comfortable - this skin is so nicekeep moving! - May 6, 2009 by VIncent leiu

COOL xD - That's my favorite skin, i always use it and my friends likes it and they use it too;D All other skins are just skins, but this is unique, funny and really cool skin. - June 6, 2008 by Pawe Misiurski

This is really funny. - Love it. Display needs to be a little bigger, but otherwise it's hilarious. Easy and fun to use. - March 6, 2008 by Rofyle Bishop

Creative - Of course, I'm using it and I must say it's ingenious! It's quite the most creative skin out there :)Good work :D - December 11, 2007 by Robert Widdick

this is the best, for sure - this is the best skin i have ever seen on winamp.wowthe person who did this deserves to be paid big time - October 10, 2007 by percy masola

One of my favourites... - ...next to "Finale", also kep alive by Nullsoft Classicz. Despite its motif of disorganization, this is one of the most intuitive skins you'll find. Who needs a darn "thinger" anyway? =) - March 18, 2007 by Everett Martin

The best skin ever - This is so original. Designed to look like a rough sketch, and as a piece of homework. My mark A++ - November 6, 2006 by John Lodge

Old school - It reminds me of the paper I wrote last year...when the boring science teacher was "blabing" about a stupid topic I can't remember, it really takes me back to the old school days when the fun was to make a really funny drawing of the most anoying teacher :) i loved it :) so that's why I give you the five stars, and I hope you keep up with the good work. - June 13, 2006 by Laura Romero

Cute skin - I always enjoy these 'paper' skins. Love the scribbling in the margins, reminds me of my exercise books when I was a swotting youngster :) - May 1, 2006 by Kath McGann

Hey Great skin - Hey this is like the best skin I have seen in ages it is nice and smiple yet it it feels like yeah (No I am not stoned!) It is like my default skin it is radd. - Andrew - April 27, 2006 by Andrew Hase

Sanity - Brings a much needed sanity back to my high-tech world. - March 23, 2006 by Steven Woolard

Hmmm.... - Good to see this back up....but I don't like the fact that it was taken down and then resubmitted. It's now reset the download count....which used to say something around 2 million *sigh* Ah well.......at least they're still giving me credit for the original. Cudos to the guy who did the video window on matching my style :DHoles...........if only they coded it and made the holes transparent.......something I could never do. Now that'd have been an update ;)-DrewBrand - February 11, 2006 by Drew Brand