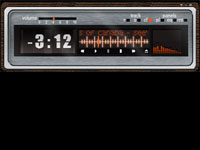 While it neither flips or has a clock feature, it does add a touch of nostalgia to your desktop.

Very Nice - I Used To Have An AlarmClock Like This. I Don'tAnymore but I Think It'sA Very Good Skin. When You're Not Playing Any Music, It Will tell the time. The only thing is whycan't you change the greyfront face from grey to another colour? Other ThanThat Question It's A Very Nice Skin. - August 28, 2007 by Joshua Wells

A very nice skin - With a few more buttons here and there, it would look just like and old clock/radio I once owned. I'd give it 5 stars but for some reason it quit displaying the hour portion of the time. It now shows only the minutes. Still it's a neat skin for playing my music and leaving room for other apps.JES - June 21, 2007 by Jack Sanders

Nice, Neat, Nifty! - Small, classic look, doesn't use up much of my PC resources and it actually works! Just like the idea if you don't play any music, the counter actually becomes a clock!!! =) Recommended for those who: 1) Reminiscing objects of the past 2) Wants to look cool 3) Wants a skin that uses minimal resources 4) Appreciate nicely designed skin - April 4, 2007 by Mun Cruelio

flipclock - in my humble opinion is this skin the best on the whole server! it's chunky, never displaced and its retrostyle is an enrichment for my desktop! great work - January 21, 2007 by igor arndt

Retro Rocks! - Grew up with that type of "digital" clock radio! - February 6, 2006 by Mort Blackthorn

OMG - I can't believe it! I love flip clocks! I remember seeing on in Back To the Future and then again in Amityville Horror. They're awesome! In fact, I'm going to check Ebay right now if someone is selling one. - September 20, 2005 by Viv T

Where have I seen this before? - This reminds me of the Amityville Deskclock. The playlist doesn't lock to the EQ or to the player. The playlist is too hard to read with red on black. - September 13, 2005 by Michael Wiseman

one of the few, the proud - so sexy. one of the few skins I deem worthy of my desktop, nice job! you all download now. - September 8, 2005 by Daniel Malony