The best soccer team in the world, from brazil! The best winamp skin too!!!

The best soccer team in the world, from brazil! The best winamp skin too!!! 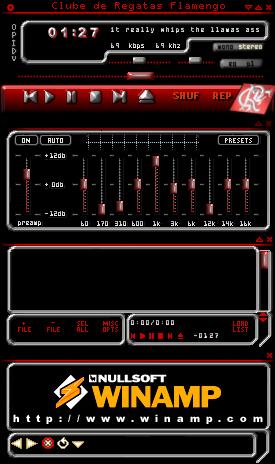 Very stylish soccer-team dedicated skin, one of the best I came across so far ! I like the well composed red bar providing the cbuttons - maybe you can design shuffle/rep similar ? There are some tiny bugs with the winshade/close buttons at the eq and pl - please fix them to make it perfect.

FODA! - Great skin, man, Flamengo ? o melhor, porra! Great to see a fellow brazilian skinner doing such mind-blowing work. But listen, man, my brother is tricolor, do you think you could make a Fluminense skin? heheheh kidding, of course... - September 3, 2001 by Adriano Albuquerque