This skin features Vincent from Final Fantasy VII.
Not much else to say.. Custom cursors might come pretty soon (at least it\'s my next project). 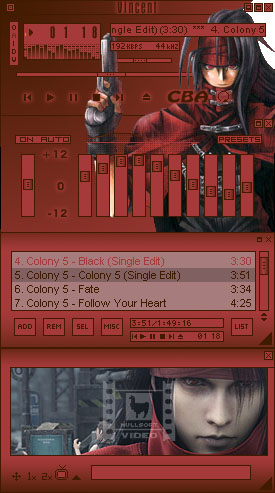 Interesting red theme. Could use a bit more variety. -fm

Just a reveiw - I absolutley love this skin its got the best final fantasy character on it xD the colours are well chosen and the cursor well done. - August 2, 2006 by sascha evans

Crew Final Fantasy VII - This is one of the best skin whenever i`ve seen before - February 1, 2006 by Walter Nawrat

Vincentamp - I love you\'re skin! Its beautiful how it blends together nicely. - January 19, 2006 by Sam Richard

w00t - *Huge smile* This is probably one of my favourite skins. Great pics, nice use of colour. Rock on. - September 25, 2005 by Astarte Atropos

Vince in Life - He looks like he's just about to kick my butt! Damn, this skin really brings out the dark and mystriousness of Vincent Valentine of Final Fantasy VII. Great work. - May 15, 2005 by Aero Tech846

VERY NEAT! - I love this skin! There werent any good Vincent skins out there and finally I have one! He's a cool character in VII. You certainly have a major talent in making skins so make more please! Ever consider Harry Potter or Kingdom Hearts? lol. - March 4, 2005 by Yuna Heartilly