This is my second skin, featuring Sephiroth from Final Fantasy VII.
This skin lack colors (yup, I'm aware of that), but this is because I felt like doing a grey metallic-looking skin.
Includes custom cursors and transparency.
24 April 05 - Update:
MikroAmp, VideoAmp and Amarok are skinned! My other skins should follow soon.. 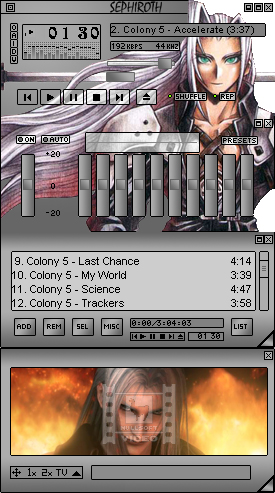 Good work for a second skin, keep it up.

nice - hey its perfect for mij theme on the computer and it fits with sephiroth's nature, so keep up the good work - March 25, 2007 by dwayne tuinier

backgrounds color - You should make an other one with the background looking like fire like in the most of the pic of sephirot ^^ - June 10, 2006 by laroche samuel

4.5 Rating really well done - Compared to your Aeris one, this is a god...lol just kidding. Very well done...as you put it yourself...it lacks color. It's got some, but it's definately an interesting skin...most have lots of color so doing a fairly colorless one is a stroke of genius. I love the style. Keep up the good work... Note I had to give 4 star marking, although I consider it 4.5. It's worth that, but it loses half a star due to the lack of color...maybe a bit of blood or something to symbolize his vengeance would have worked out better for him... - February 18, 2006 by Mark Ninnis

good but too dull - My biggest complaint is that it is bland in the color scheme. I like putting it on every once in a while but the greyness gets old faster than I'd like. Other than that, it's terrific. - August 29, 2005 by z l

Cool Skin! - hey you did a nice work... I liked the detail you put on the bottom too, but the only more or less bad thing is that Sephiroth looks to nice, to happy jejeje but thats not a big deal, its actually really good for your second skin, and I love the colors! - August 27, 2005 by Claudia Damiani

Very nice! - I dont think it lacks color, it all fits well. The transparent part to the right of Sephiroth is pretty neat. - May 2, 2005 by Donnie Weir

Drool goes on floor.... ughhhhrk - Wow.... I am so impressed. One suggestion, shape the whol player differently, make it flow to his body form. It seems hard, but it actually isnt. Just a matter of doing what you did to the blank spot to any non vital areas. In any case, I love this game, feel badly for the tortourouse stuff that happens to Seph and Cloud, but, love this skin - April 6, 2005 by Matthew Thompson

mmmmmmm... sephiroth... - point 1: Giovanni, get a life. it doesn't matter who we like or hate, or if we haven't yet played the games. i've completed ffVII many times, at least 12, and every time decided sephiroth didn't deserve what he got, he deserved worse, but he's stil the coolest + hottest villain ever created by squaresoft. point 2: this is a review section, not a message board. if you want to make you views on this known, find a message board with likeminded people. well for that, you'd need a mind, but you get my drift... point 3: this skin rule. i'm a connesiour(sp?) of ff skins and this is definitely among the top 3, with Liberi_Fatali (ffVIII, squall + rinoa) and the not brilliantly done, but timeless skinshot, with sephiroth turnign into the flames of Nibelheim. - February 15, 2005 by Eddy Blackmore

Awsome Skin - This is an absolutely AWSOME skin. Im a huge FFVII fan. Please do more of these masterpieces soon. I will be waiting. - January 29, 2005 by Garrett Boyd

Final Fantasy perfection - Well done on this skin man, its excellent. Fell in love with Final Fantasy 7 some loooong years ago so I can see your motivation.That and Sephiroth is the coolest FF character yet. - January 7, 2005 by Helios The_Smokey

the FF7 controversy - Giovani, Yuna, I've played and beaten ff7 over 5 times, each time I have to like sephiroth more and more each time, it's a given that the conflict between him and cloud is one of the best in final fantasy history. As for my personal opinion, it's simply a cool looking skin, can't everyone just look at how it looks before voting, I think it's good and I'm getting it for my winamp even as I type this....ok enough ranting from me. Just everyone no need to get mean about a video game. - December 18, 2004 by jason yates

it pwns so much - I haven't seen many good skins with the media library skinned to boot, But this one takes the cake! I don't know what Giovanni was on when he reviewed this but he needs to step back and take in the glory of this skin for a bit. The only shortcoming was the lack of many colors, but silver suits Sephiroth just fine. - December 15, 2004 by Stuart Lash

Giovanni, you suck! - Yeah thats right, Giovanni! Quit voting 1 star over and over again on a GREAT Sephiroth skin! Lets see you try and make a better one! What a moron you are, if you dont like this skin than dont say anything and move on! I love it and i can keep voting 5 stars over and over again if i have to! Good job dude, on making this skin and sorry about saying that that blank spot at the top right hand corner is annoying, i've gotten over it now and it doesnt matter, just understand that some ppl didnt like it and dont get all mad. :-) Sephiroth is so cool! Everyone thinks so, except losers like Giovanni! Have something to say, now? Go ahead... - December 6, 2004 by Yuna Heartilly

Again... - I don't like grading my own stuff, but it seems to be the only way to respond to all comments.. Giovanni. . . Do you have something against me?!! If so, e-mail me instead of voting 1 over and over again. Not very mature.. And thanks for the flaming... =/ The blank part is transparent. Again, this may be because of your version of WinAmp.. I don't know. Works for me. I could add a non-transparent image in the wsz-file in a future release... Thanks for the nice comments! - November 22, 2004 by Jonas Theslof

Im playing FFVII now Giovanni,are you happy, LOSER!? - Im playing FFVII right now and the story of Cloud and Sephiroth being "war buddies" is interesting. I stopped at about..hmm...when im at Red XIII's hometown and his grandfather tells me to pick a person to go to this supposeflly "dangerous" place. Ok, are you HAPPY now Giovanni? that i actually play FFVII because you're making a big deal out of it if i do or not! You're such a RETARDED LOSER! I never said you hated the game all i said was it was a great game and that sephiroth was awesome. Thank you for the ppl agreeing with me cuz it is ones opinoin and who cares what the other thinks. Anyway i like sephiroth (the best villain!) FOOL!!!!!!!!!! who cares if one likes the bad guys! I am NO fake FF fan! I love the games! I played Kingdom Hearts and it has FF characters in it, although not a lot but still, ok!! Hope everyone understands what i mean by this and by the way dude nice skin but i have to agree with some ppl that the blank spot at the top is a bit annoying and blank... I CANT WAIT UNTIL FF: ADVENT CHILDREN!!!!!! :-D - November 21, 2004 by Yuna Heartilly

sephiroth is a God - nice skin, a little to "dead" for my taste but it's very good skin. and about if Sephiroth rules or not. I'd have to go with Yuna, Sephiroth is one of the best characters ever made. and I HAVE completed the game a couple of times. the only thing I don't like is what has happened to him in the end - November 18, 2004 by Cid Highwind

Such is to be expected of a fake FF fan. - So yuna, you played a little bit now. O sorry, i shouldn`t have said that other stuff then, having completed the game TWICE myself. Sure sure, go and "think he`s cool" then. So if you don`t care you don`t mind me calling you a fool right? Fool. What is it with these ppl liking the bad guys anyway? Same as everybody choosing Russians when playing Red Alert. - November 15, 2004 by Giovanni Leanza

~The Review Of Yokai~ - ok, the blank space at the side annoys me somewhat, especially when your desktop is not white... Meaning it just makes it look really weird! yet, its not like i could make one better that that :/ Good Work! ~Yokai~ The FFVII is getting kinda annoying, but i guess if its different its different! - November 15, 2004 by Eoin Oneill

... - Well "Giovanni" I have heard from LOTZ of people that FFVII is a GREAT game and that Sephiroth is an AWESOME villain and I actually played a little bit, it must be great...i guess you're the only one so negative about him and i still think he's a cool character, and i dont care what other ppl (like yourself) have to say about him. Oh well... ~YUNA~ - November 4, 2004 by Yuna Heartilly

So called FF fan - So "Yuna", you say Sephiroth owns? Know FFVII first before you say such foolish things. Sephiroth is a ***** and must die many deaths while choking in his own *****. Why? Play the game, you'll see. It`s a sin in it`s own right that you who call herself Yuna, has not played the best FF in the series yet at all. - November 4, 2004 by Giovanni Leanza

Great! - Great skin! I finally have a Sephiroth skin! - November 3, 2004 by Yuna Heartilly